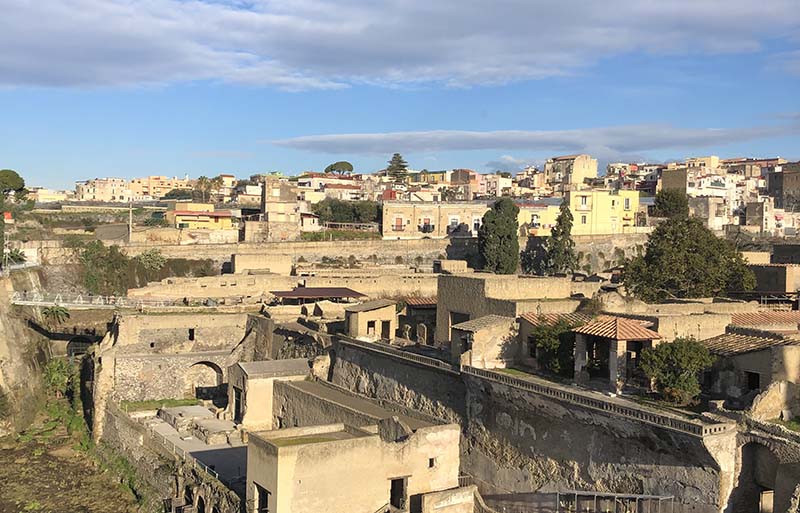 Charles Dickens’ historical novel traces life in London and Paris during the French Revolution. If you want to examine how ancient Romans lived in 79 B.C., then you must visit the archaeological ruins of Pompei and Herculaneum in Italy. These two archaeological sites are easy to visit on one day during a tour of the Amalfi Coast.

On 24 August in 79 A.D., the first recorded eruption of Mt. Vesuvius occurred. It devastated the nearby hillside cities of Herculaneum and Pompei but in strikingly different ways. Instead of volcanic ashes spewing over Pompei’s buildings and burying the city, the eruption resulted in lava and ash raining down on Herculaneum.

Charles Dickens writes about his adventures in his travelogue Pictures from Italy. His description of the ancient Roman towns of Herculaneum and Pompeii, which lie in the shadow of Mount Vesuvius, summons up a vision of decay:

“. . . morsels of tesselated pavement from Herculaneum and Pompeii, like petrified minced veal . . .”

But I believe Pliny the Younger provides the most striking imagery of the volcanic eruption: “A cloud, from which mountain was uncertain, at this distance (but it was found afterward to come from Mount Vesuvius), was ascending, the appearance of which I cannot give you a more exact description of than by likening it to that of a pine tree, for it shot up to a great height in the form of a very tall trunk, which spread itself out at the top into a sort of branches; occasioned, I imagine, either by a sudden gust of air that impelled it, the force of which decreased as it advanced upwards, or the cloud itself being pressed back again by its own weight, expanded in the manner I have mentioned; it appeared sometimes bright and sometimes dark and spotted, according as it was either more or less impregnated with earth and cinders.”

The archaeological areas of Pompei, Herculaneum, and Torre Annunziata were inscribed in 1997 as UNESCO World Heritage sites for their outstanding universal value.

“The vast expanse of the commercial town of Pompeii contrasts with the smaller but better-preserved remains of the smaller Herculaneum . . .”

There was three key criterion for their inclusion:

A visit to Pompeii and Herculaneum literally “stops the clock” to understand the ancient Roman’s life when the eruption of Vesuvius occurred in 79 AD.

Herculaneum was a vacation resort for Rome’s patrician families due to its enviable location on the coast. Its name is derived from the Greek god Hercules which townsfolk worshipped. There is controversy over when it was founded (1243 B.C. or 7th century B.C.)

Herculaneum reached the height of its splendor thanks to its coastal location, clean air, and mild climate. It was a popular resort town for many of Rome’s patrician families until the eruption of Vesuvius destroyed it.

A laborer accidentally discovered the ruins of Herculaneum in 1707 when digging a well for the Prince of Lorraine. He unearthed statues and marble fragments, which decorated the theatre of Herculaneum. Charles III of Bourbon initiated work in 1738. Then the Accademia Ercolanense was created in 1755 to continue excavations.

You can easily tour Herculaneum in a half day. A three-hour tour will include:

House of Argus
House of the Skeleton
Thermopolium
Men’s Baths
Double Atrium House
Hall of the Augustals
House of the Beautiful Courtyard
House of Neptune and Amphitrite
Women’s Baths
Samnite House
House of the Wooden Partition
Large Taberna
House of Relief of Telephus
House of the Deers
Terrace of M. Nonius Balbus
Fornici

Herculaneum was blanketed in compose that carbonized and preserved the wood structures as well as artifacts of regular daily life, such as food, beds, and doors. This ancient city—located in Ercolano in Campania, Italy—represents a “sealed” city.

Herculaneum was a wealthy city as evidenced by the intricate Roman villas as well as lavish frescoes. It was not a center of commerce, like Pompei. This is an ancient Roman city where I can see the public bath (Terre Femmini) where women gathered daily for therapeutic and social reasons. (They did not bathe at home.) Household gods were worshipped at shrines located inside private residences.

I examined a typical wealthy merchant’s home starting in the atrium. This is the public space that is always seen on entry to a house. Beyond it lies the “office” where the pateras familias worked. And work was a 6-hour morning job that ran from 6 am to 12 noon. Afternoons were reserved for exercise followed by time spent at the public baths.

Deeper in the house lies the gardens which are a private courtyard where the family can gather for relaxation. They connect to private rooms for rest. Herculaneum provides an intimate and up-close view of the life of a Roman family.  “Exceptionally preserved finds include everyday objects such as foodstuffs, architectural elements and wooden furniture,” according to UNESCO World Heritage.

In contrast, Pompei was a bustling trading town that included shops, bakeries, restaurants, and homes. This is a vast archaeological site. It is believed that 20,000 lived in Pompei in 79 A.D. It was a bigger city than Herculaneum.

“Pompeii, with its well-preserved buildings in an excavated area of 44 ha, is the only archaeological site in the world that provides a complete picture of an ancient Roman city.”

I feel like I was visiting a small city when I enter the gates. There are nine separate sections in the “Plan of the Excavations of Pompeii.”

For example, Regio I is “La Citta Commerciale.” You can roam the streets and walk into the houses and shops to investigate. We saw a primitive oven that would have been used to prepare food for a restaurant.

Houses are individually named as “Casa di …” There are also villas, temples, schools, and shops. The walls of many buildings are scrawled with graffiti.

In Roman times, the streets did not have names. So residents provided directions on the location of their homes by public landmarks. For instance, there are over 40 fountains in Pompei and each is distinctive.

Plays were performed in the expansive amphitheatre. A smaller outdoor theater hosted concerts.

Unlike the people who did not escape the eruption in Herculaneum (and died from extreme heat which caused their brains to explode), the residents of Pompei died from suffocation or were crushed when their roofs collapsed.

There was no temple in Herculaneum. In Pompei, its oldest temple—built in 6th century BC—is dedicated to Apollo. You can also see a statue of Diana (his sister).

Over 1,150 bodies have been excavated in Pompei. Among the most haunting are the plaster casts of people (and a dog) who perished including one I dub “The Thinker” who is sitting down with his knees raised to his chest at the time of death. 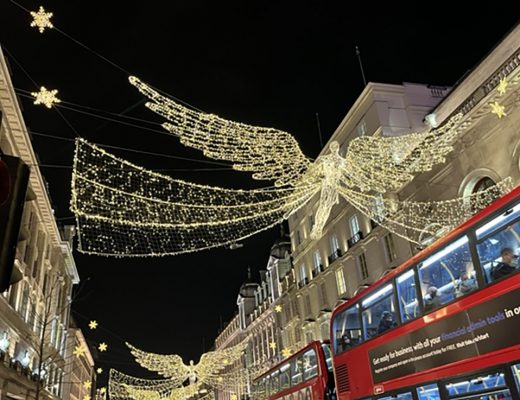