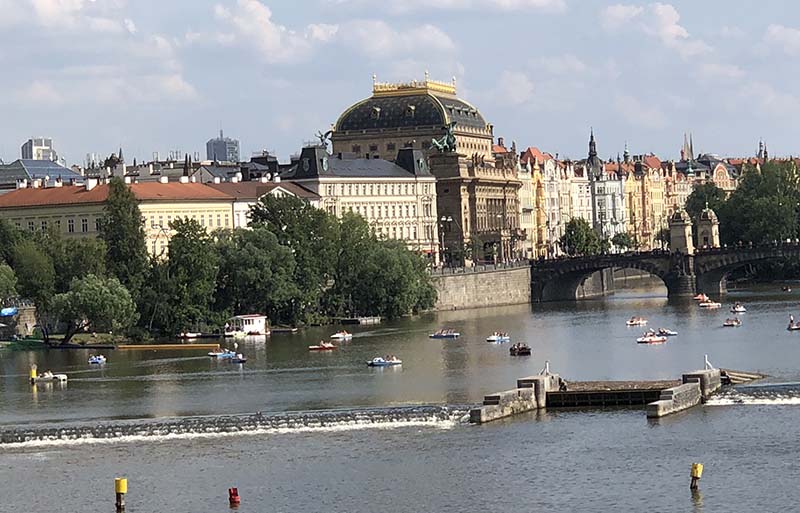 Prague is a proud peacock. There are those who want to dub her a replica. You will hear the term “Paris of the East” brandished about. Don’t listen to this talk. Prague is the real thing – no xerox copy.

I visited Prague in June. It was sunny and quite hot, perfect weather for shorts and sandals. But this was just the beginning of the luck that would unveil itself – like the majestic peacock with his brilliant sapphire blue and emerald green plumage in the courtyard of the Waldstein Palace. I discovered the city before the crowds of tourists descended for summer vacation.

Prague is proud, palatial and profound. I won’t lie. When you are in Prague, you will be reminded of Paris. Parizska Street is lined with high-end shops selling shoes, purses and clothes. The architecture recalls George-Eugene Haussmann who completely redesigned and rebuilt Paris in the 1850s.

But believe me, you won’t find pork sausages being roasted on Parisian avenues and boulevards. Nor will you buy large tankards of beer. This is distinctly a Prague phenomenon—watching tourists and locals juggling a sausage sandwich in one hand while drinking a foamy glass of Czech pilsen.

This was the scene that unfolded on a warm Saturday evening as my Uber driver dropped me off at Wenceslas Square. I had booked the Evening Ghost Tour of Old Town Prague. My guide was an expat who hailed from America but had chosen to relocate to Prague with his partner. He fell in love with the city.

We started our tour surrounded by milling tourists who wandered around the square. Prague can feel like an ADD city as there are so many random distractions—musicians, dancers, crying children. (I don’t remember seeing many dogs. Strange.) Plus over 8 million tourists visit annually. It is the fourth more visited European city after London, Paris and Rome.

Our guide David who was dressed in black coat and top hat explained that Prague has a dark side. People in comas had been buried alive. And ghosts still wander the streets seeking vemegeance for crimes against humanity. Couple this information with spooky side alleys and you will feel uneasy.

But I think I felt the most scared in the Jewish Quarter when we visited its cemetery. It was pitch black. The narrow street was dimly lit. Our guide told us of the spirits of small children who died during an epidemic and now roam restlessly in the cemetery. I swear I felt these children were hiding behind the stone walls, watching us. I wasted no time calling my Uber after my tour ended. I was spooked.

The next day I rose early for a four-hour private tour with my guide Eva. This allowed me to customize what I wanted to see based on my interests in history, architecture and art. We focused  on the Right Bank on Sunday and the Left Bank on Monday.

Eva was extraordinary. Since she is a Czech native, she was able to share so much information about growing up during the communist regime as well as life after the Velvet Revolution. (Before 1989, the former Czechoslovakia was ruled by the Communist Party.)

Prague is situated in the northwest corner of the Czech Republic on the Vltava River. It was the capital of the Kingdom of Bohemia. Several Holy Roman Emperors resided in Prague including Charles IV. (There is even a bridge named after him.) Its historic center is listed on UNESCO as a World Heritage site.

Eva delved into Prague’s proud past as we wandered down its medieval cobblestone streets. She steered me through a warren of alleys in Stare Mesto (Old Town-circa 1242) and Nov Mesto (New Town founded in 1348). We also walked through Josefov (Jewish Quarter) and Wenceslas Square although the Astronomical Clock was being renovated. We discussed the city’s different architectural periods—Gothic, Renaissance, Baroque and Classicist. Prague is one of Europe’s best preserved cities because Hitler didn’t lay waste to it.

I also enjoyed the city’s modern architecture, especially the Dancing House (nicknamed Fred & Ginger). I honestly don’t understand how this building keeps standing. It is the Czech’s version of the Leaning Tower of Pisa. The building was erected in the 1930s.

Authors have waxed lyrical about this romantic city. Richard Wagner opined: “The ancient splendor and beauty of Prague, a city beyond compare, left an impression on my imagination that will never fade.”

But I think Franz Kafka captured the stranglehold that this Czech city holds on your heart—“Prague never lets you go . . . this dear little mother has sharp claws.”

His connection to Prague is memorialized at the Franz Kafka Museum. It features many first edition Kafka books. You can also view his diaries, drawings and correspondence.

And you don’t want to miss artist David Cerny’s controversial and irreverent bronze sculpture outside the museum. You can watch two men write literary quotes with their pee stream in the fountain (which is shaped like the Czech border.)

A last stop on our walking tour was the John Lennon Wall. It is graffiti on steroids—covered with political statements and snatches of Lennon’s songs written for the Beatles.

What a great morning to visit the National Buildin

Error: Access Token is not valid or has expired. Feed will not update.

I ended my first day tour in Prague with a 45-minute boat trip. Leaving our dock we traveled down a skinny canal known as the Venice of Prague. Then we headed in the open waters, past the Prague Castle, the Theatre and under the Charles Bridge. If I closed my eyes, I could almost imagine the royal route walked by Czech kings in a procession to their coronation in the St. Vitus Cathedral at the Prague Castle. 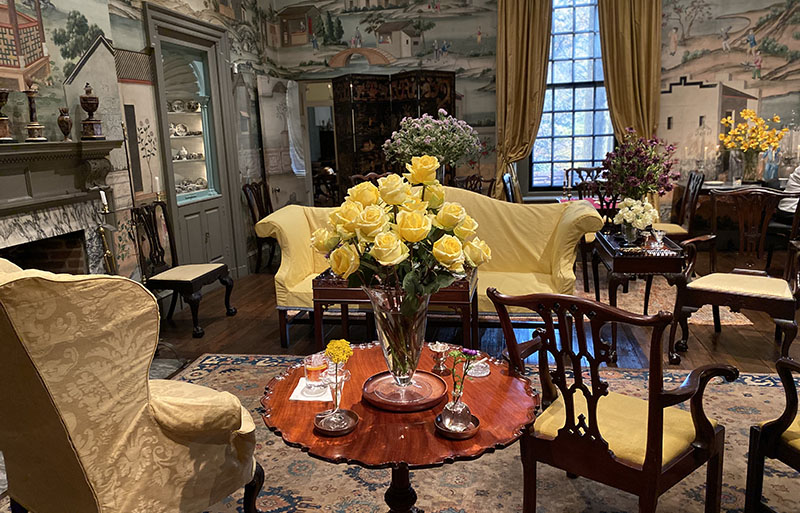 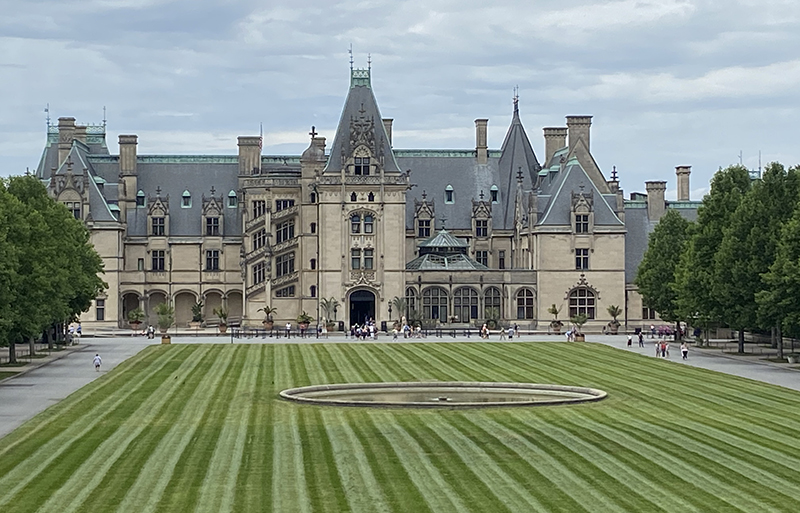 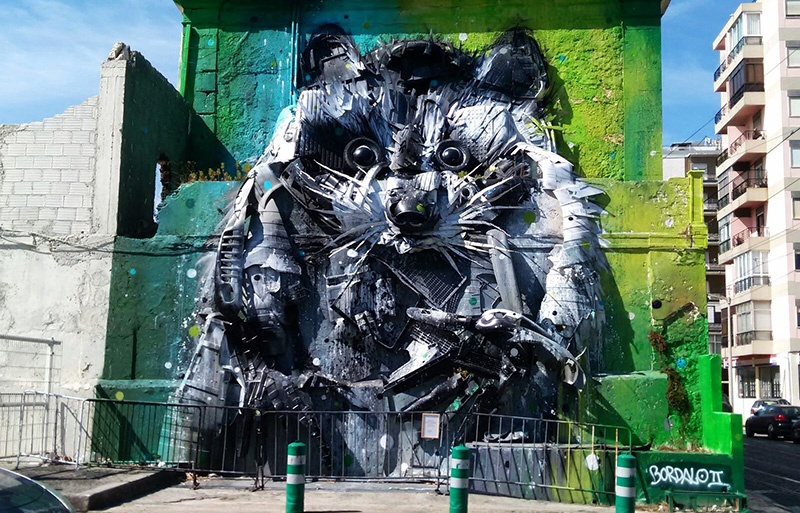 July 3, 2021
Tom Yates is my favorite sculptor at Annmarie Scul

What a great morning to visit the National Buildin

Parker has a cozy new blanket!