Italy’s Portovenere is located on the Ligurian Coast. It is a gateway city to the renowned Cinque Terre (Five Lands) in northwestern Italy. Its skinny tall homes look like a box of Crayola crayons – peach, lemon, mocha, and vanilla – stacked on its steep granite terrain. Boats bob in the still waters of the harbor. Forbes declared it “Cinque Terre’s gorgeous sixth town.” 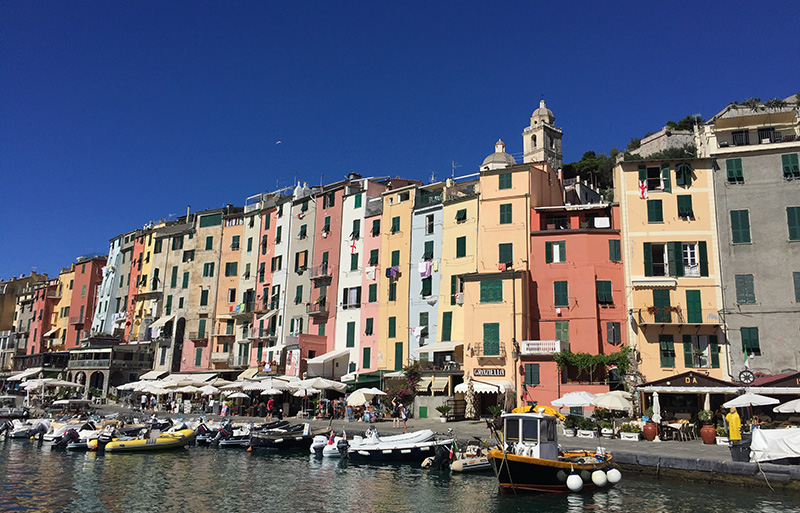 I discovered this Mediterranean jewel because I am cheap. Planning a two-week vacation in Positano, Italy in July, I was shocked by the AirBnb prices (forget about staying in a hotel). After extensive research and cost comparisons on the region, I discovered Portovenere. It offered ferry services to the five Cinque Terre villages—Monterosso al Mare, Vernazza, Corniglia, Manarola and Riomaggiore—as well as Positano. I was ecstatic!

UNESCO designated Portovenere, Cinque Terre, and the Islands (Palmaria, Tino and Tinetto) as a World Heritage site in 1997: “Portovenere was an important commercial and cultural centre dating back to the Roman period, from which archaeological remains survive in its vicinity. It is compact in form, the houses aligned along the coastline culminating in the Doria Castle, which dominates the settlement and is a historical palimpsest, with many traces of its medieval predecessor.”

I knew that Portovenere would offer historically significant architecture and a peek at how people lived over the last 1,000 years.

My daughter Claire and I arrived in a Portovenere after an eight-hour international flight, followed by a long train ride from Rome to La Spezia, followed by a local bus ride. We were jet-lagged and weary. Our home is perched on a cliff overlooking the bay. This one-bedroom AirBnb was cozy with several frustrating elements—poor mattress and ancient stove. But the VIEW—I would have put up with almost any aggravation for the right to sit outside on the recliner each morning as the sun rose and sip my cafe latte.

View from my patio

For an English major, this was a fantasy made real. I was walking in the same steps as Lord Byron who swam across the Bay of Portovenere to visit his poet friend Shelley who was staying in the village of San Terenzo. This feat is immortalized at the Grotto of Byron which is nicknamed the Bay of Poets. Descending the slanting slabs of grey rock to reach the sea wall is quite an endeavor. I marveled at the sun worshippers who hopscotched across jagged rocks to find a perch to lay supine. 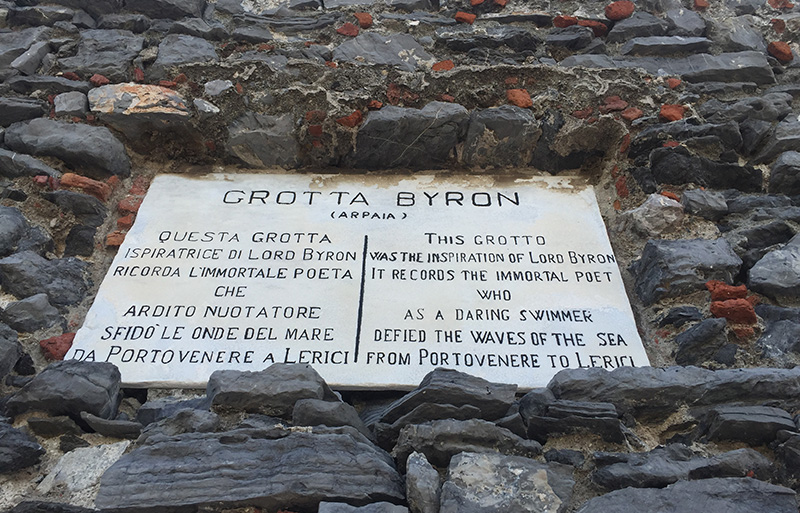 The funny thing about staying for an extended period in a small town is you begin to pick up its rhythms. Perhaps because I was staying in a local’s house—instead of sequestering myself in a hotel—I was able to insert myself into their local life.

I shopped at the village’s only grocery store and watched buyers bargain for the best cut of meat or fresh fish. I secretly watched how one Nonna squeezed the melon before she chose it.

Shopping for food while traveling abroad is always an adventure as I had to translate each item from Italian to English to figure out what I should buy.

Sunbathing on the Mediterranean Coast is disappointing because you lay on rocks instead of soft sand. It is not comfortable. Claire and I solved the problem by buying floatable rafts.

Historically speaking, Italy’s Portovenere is a treasure trove. The black and white-striped Church of St. Peter commands attention if arriving by ferry. It looms large on the horizon as the captain steers his vessel on the turbulent sea.

Climbing up the steep steps to the church is also typically the destination for all the families that walk with their children in the evenings up the promenade. (Dripping cones of gelato are held tightly in toddlers’ chubby hands.) The rugged stone wall provides lookout windows to gaze below at the foaming white waves crashing on the rocks. 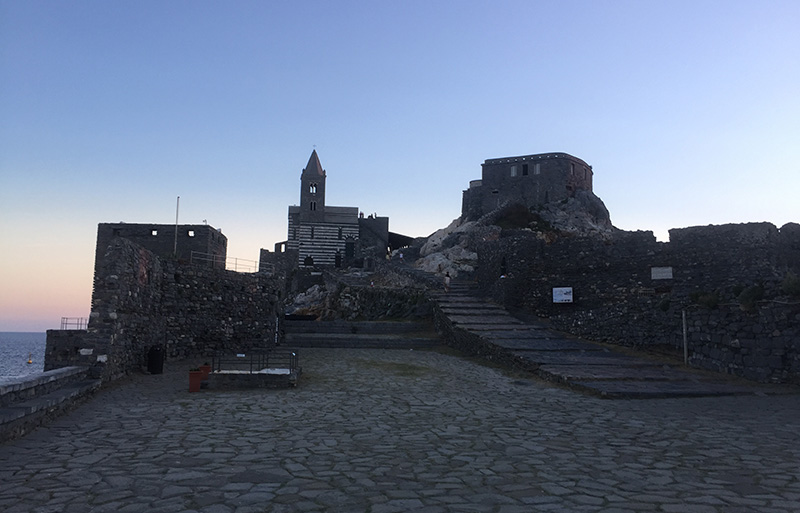 We also visited the Genoese church of St. Lawrence which dates back to 1098. The architecture is Romanesque. The site reportedly was once a temple honoring Jupiter.

On August 17, Portovenere celebrates the Festival of the Madonna Bianca. Residents lead a torchlight procession through the village’s historic centre.

Another must-see historical site in Italy’s Portovenere is Doria Castle. You will need to hike up the steep terrain to reach this monolithic structure which is protected by walls. You can wander around its extensive courtyard. I felt like a seagull as my eyes swept over the roiling waters below. This perch is worth the climb to arrive at this aerial view. 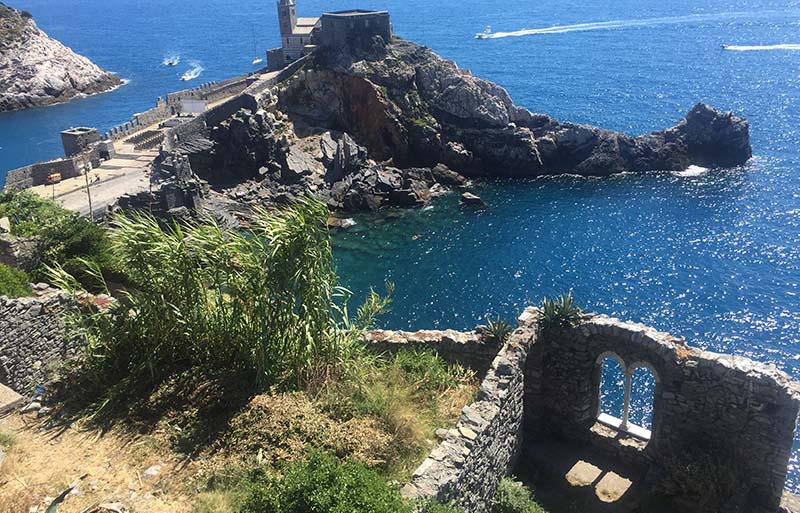 We dedicated another day to hiking around the hilly town to investigate its houses—each features a tiny terrace resplendent with lush vegetation, flowers brimming over terracotta pots, and fragrant herbs. I could imagine many a dinner served outside at  sunset. My daughter and I even discovered a beautiful white Angora cat who allowed us to sit on a step and stroke her. 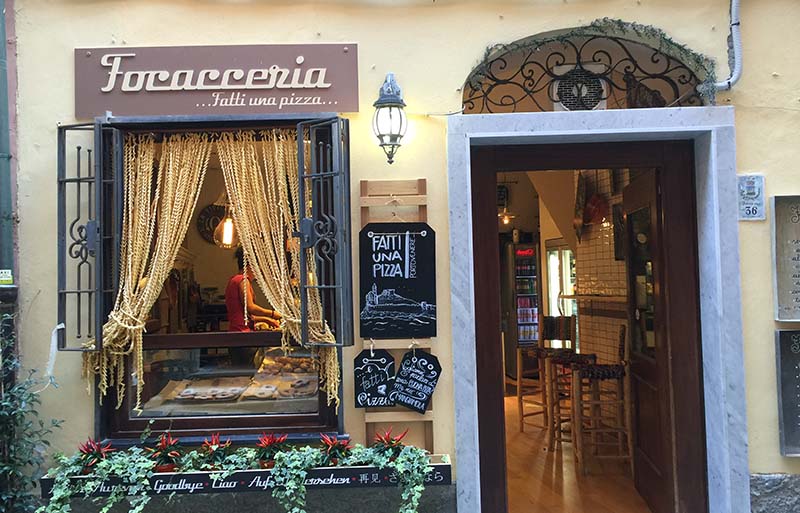 But my favorite part of Italy’s Portovenere was visiting the shops tightly stacked together in a medieval alley. This pedestrian lane snaked down a seemingly deserted brick path. It featured shops and restaurants tucked away from the glare of sunlight. I found myself coveting bottles of olive oil, hand-painted t-shirts, and cups of gelato. Mi amor ITALIA.

NOTE: Portovenere is a sane substitute for Cinque Terre when visiting this region. I liked the ease of taking the ferry to visit a different village each day but avoiding the traffic jams on the train and exorbitant hotel costs. 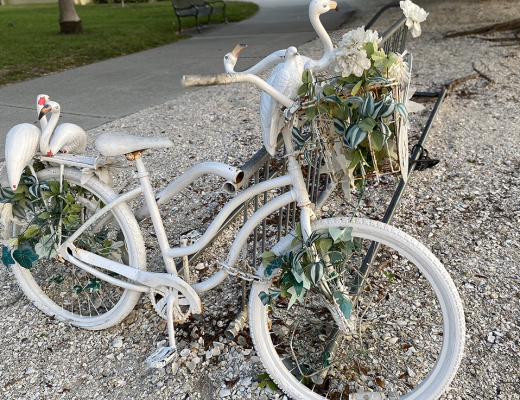 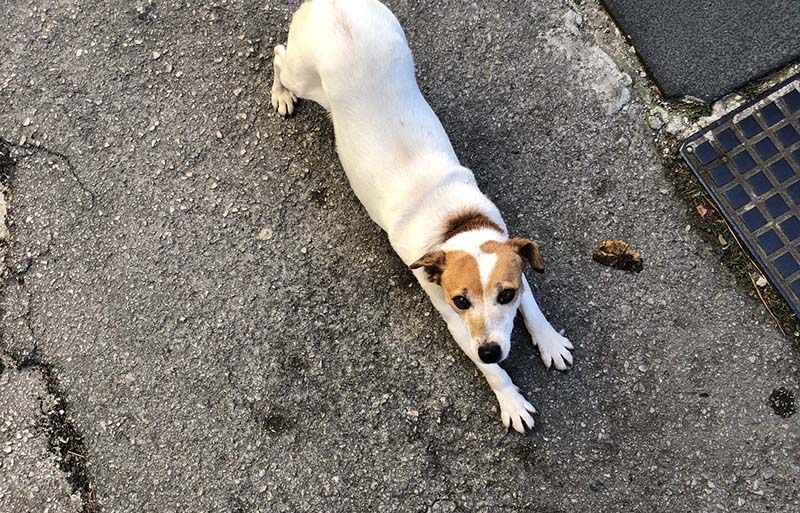