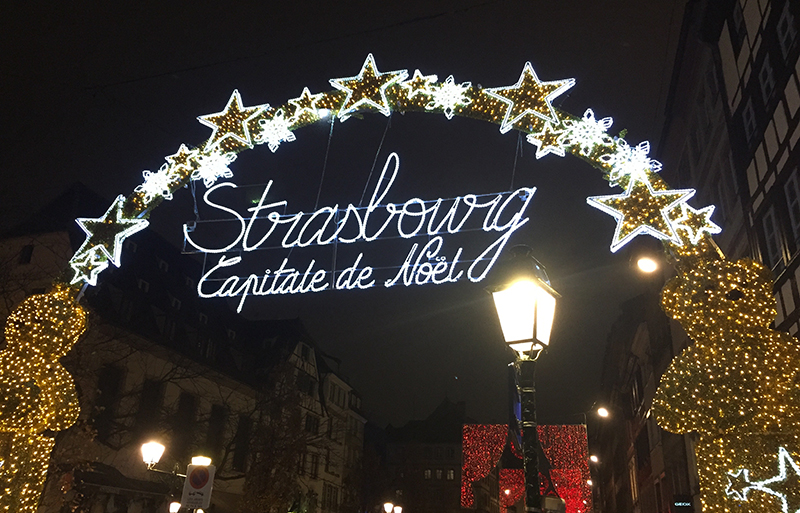 I try to angle my body past the people—young, old and in between—packed nearly sideways in the stalls of the Marche de Noel in Strasbourg, France.

Originally christened the “Christkindelsmärik” (market of the Infant Jesus), it is France’s oldest Christmas Market. It comprises 12 different themed markets and is held outdoors each year from late November until December 31.

I follow my nose toward the succulent aromas. Sausages sizzling in fat perfume the air. Big vats of sauerkraut reek of vinegar. Crispy laced crepes bake on the griddle before being coated in Nutella. The sweet smell of vanilla wafts in the congested corridors. I am famished.

The chief reason for my visit to this Alsatian city—which is located in eastern France near the German border—is to experience first-hand the magic and traditions of an authentic French celebration of Noel. And Strasbourg reigns supreme as the granddaddy of all European Christmas markets. 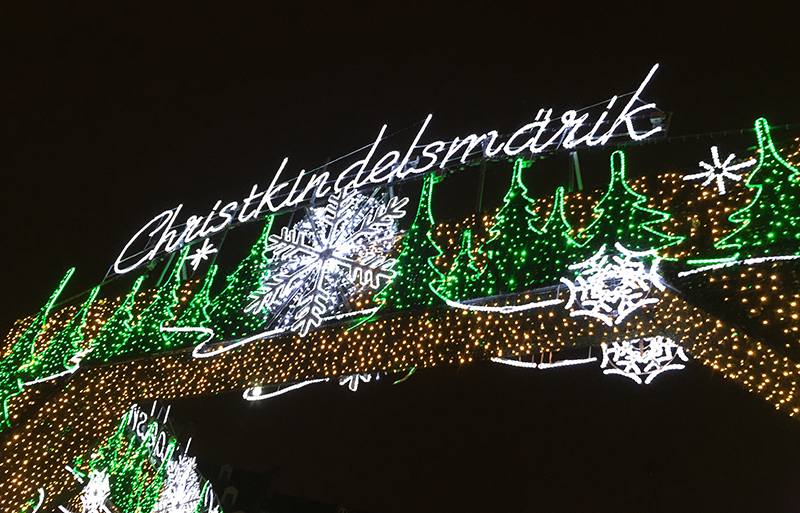 Since I reserved three full days to tour Strasbourg, there is no pressure to fill every minute with sightseeing tours. Instead I want to sneak up on Strasbourg by winding down a tiny alley to find a bakery to buy a quiche Lorraine (which I can eat on a park bench with my mittens still on), by bending over a bridge to watch the swirling river below and by peering in frosty window panes of medieval homes to see the rough-hewn furnishings. I am in search of Strasbourg’s holiday secrets. 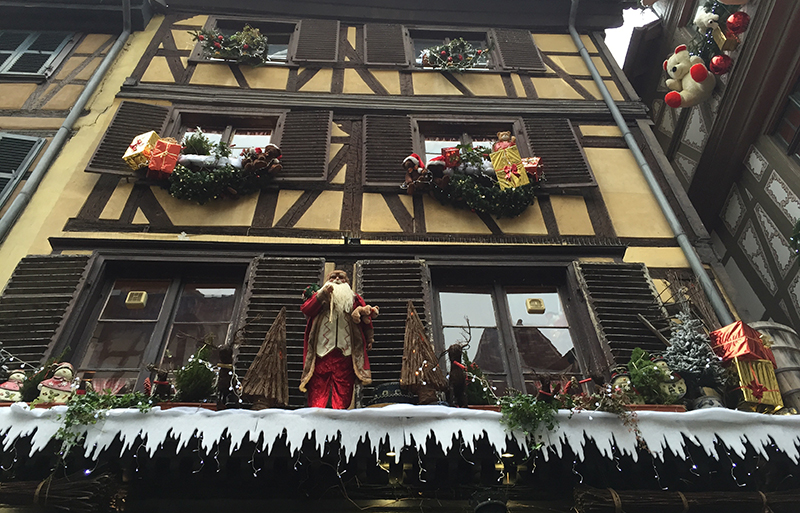 France’s second largest city, Strasbourg blends Old World with New World architecture—an ultramodern European Union Parliament Building is but minutes away by boat cruising down to the Ile River where the historic quarter of Strasbourg (known as “Petite France”) sits. The brown and beige-stucco homes dating back nearly 700 years were once owned by millers, fishermen and tanners. In 1988, Petite France was designated an UNESCO World Heritage site.

Just as women adore dressing up in crimson silk frocks and draping themselves in fur stoles and pearls, so Strasbourg transforms itself during Christmas. Its half-timbered/half-stucco homes in Petite France wear glittering jeweled lights—which twinkle emerald, ruby and diamond—while ivory tapered candles flicker in upstairs chalet windows. A whiff of pine needles perfumes the air.

With the temperatures plummeting to 35 degrees and my toes feeling like ice cubes sausaged in my fur boots, I head straight for the mulled wine this afternoon. The first sip is elixir. The cloves mix seductively with the white Alsace wine that is steaming hot. The after taste of cinnamon and cloves coats my tongue. My lips are dyed burgundy. For my snack, I buy a salty bretzel (pretzel) and coat it in Dijon mustard. Now I am fortified for an afternoon of shopping. 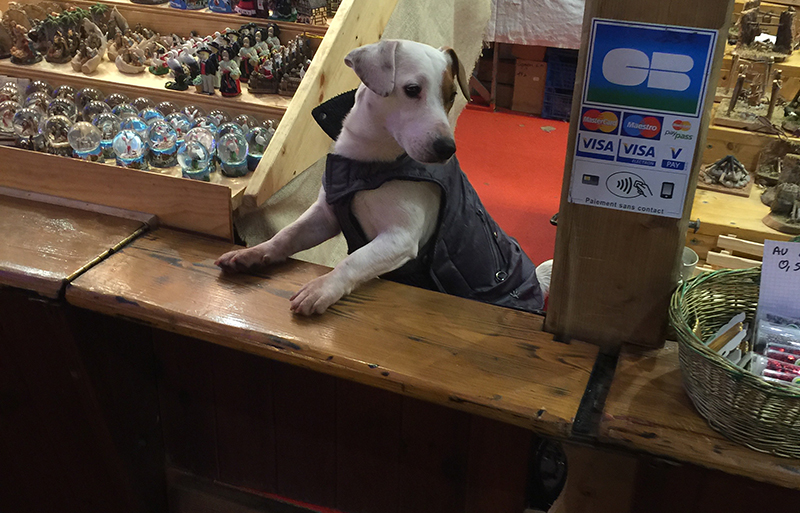 There are over 300 wooden stalls (known as chalets) scattered throughout Petite France (and also across from the train station). Hand-carved Father Christmas statues stand poised to grab a red velvet satchel for their Christmas Eve journey. Pink-cheeked French babies swathed in fur blankets reach out for crinkly bags of nougat at vendors’ stalls. A shopkeeper’s Jack Russell terrier offers his paw for children to shake.

For some American tourists, this outdoor holiday market is the antithesis of a Black Friday. Instead of chasing bargains locked in an overheated gargantuan mall, tourists head outdoors to find the perfect present. They shop for homespun Alsatian goods, such as hand-knitted wool sweaters, embroidered tee-towels, wooden toys and glass tree ornaments. I stand in line to buy two sets of hand-dipped candles—forest green and cranberry red—that are carefully wrapped in waxed paper and tied with a ribbon.

Nights are the magical time when Santa’s elves come out to play. At Place Gutenberg (the center of medieval Strasbourg), I walk under the red and green illuminated sign that proclaims Strasbourg as Capitale de Noel. I marvel at the illuminated angels hanging in the air and blowing celestial horns which light my path. The long trail of fairy lights makes me think that magic is at work here. 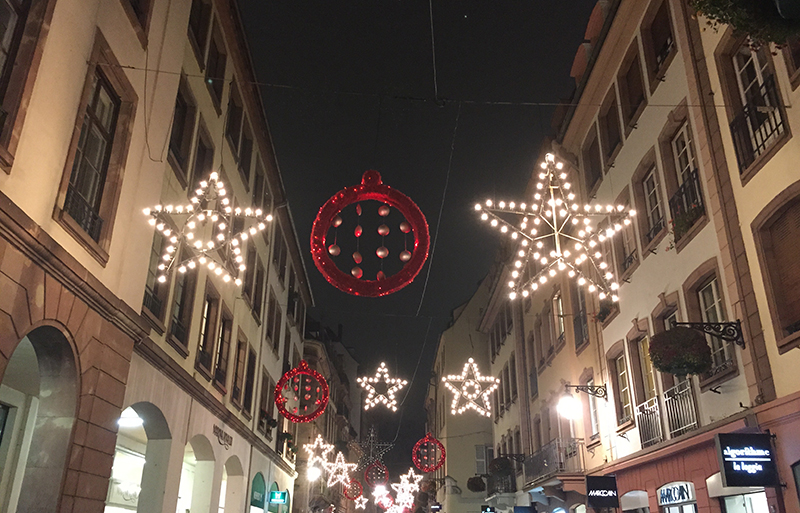 At Place de Kleber, I stand in a drizzly rain to watch a “walk-in” movie projected on the brick face of side-by-side townhomes. The dialogue is in French but I can guess the meaning by the cartoon figures. Babies sit in their strollers and chortle.

I decide to eat dinner early since my jet lag is sneaking up on me. I head to Place d’Austerlitz for the Market of Christmas Treats. There are stalls for local bakers, winegrowers of the Couronne d’Or, Alsace foie gras producers, the Tribu des Gourmets d’Alsace and local beer brewers.

I choose tarte flambee, a pizza-style sandwich that consists of a thin flat bread covered with fromage blanc, crème fraiche, yellow onions and thin strips of bacon. It is broiled until crispy brown. The pungent onion odor wafts through the air. I eat standing up at a high-top table while the sounds of French Christmas carols serenade me. Then I follow the river back to my hotel and collapse in bed.

The next morning, I accidentally oversleep so I have a late start on Tuesday. I am staying at Hotel Regent Contades, a grand 19th century mansion, which is an easy 15 minute walk to Petite France. My stroll follows the snaking path of the Ill River which meanders in a curve parallel to the street and winds down to the canal locks. Back in the Middle Ages, the river was a thoroughfare for boats that plied the waters to transport goods. To get to Petite France, I walk down past the Quai des Bateliers on the Ille River. 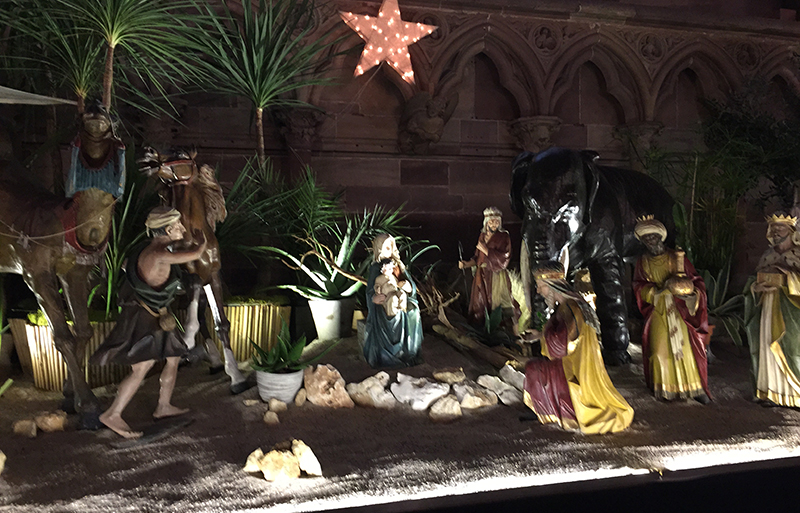 I begin my sightseeing at the Cathédrale Notre Dame de Strasbourg, an imposing Gothic matron that watches over Petite France. Built on the prior site of the Roman Argentoratum, the pink-hued sandstone cathedral dates back to 1176. When completed in 1439, it was the tallest structure in the world. I tour the church’s magnificent interior which features stain glass windows depicting the life of Christ and Creation. There is an elaborate display of nativity scenes that feature Joseph, Mary and the babe Jesus in the straw-lined barn.

In the afternoon, I drop by the Tourism Office to purchase the City Pass. It includes audio devices for the self-guided walking tour. Over the next three hours, I traipse to over a dozen sights. I love the easy pace of choosing where to dawdle (such as Palais de Rohan). But my favorite attraction is the Musee de l’Oveure Notre-Dame, which consists of three medieval and Renaissance houses linked together. Inside I marvel at the low-hung carved wooden ceilings, hidden courtyards and spiral stone staircases. The museum displays medieval and Renaissance artwork as well as the architect’s original parchment drawings for the cathedral. 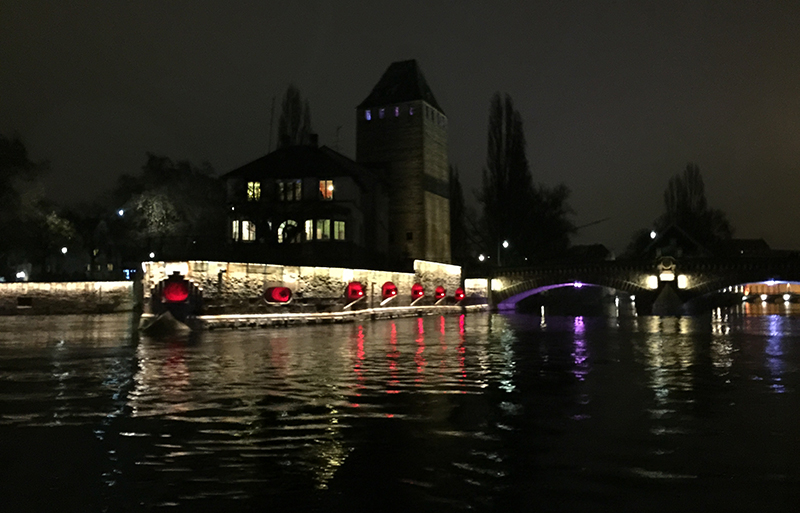 On Wednesday night, I take the glass-covered sleek Batorama boats that ply the Ill River. From my toasty-warm vantage point, I can observe the colorful Christmas illuminations that trace the outlines of the historic buildings. The boat travels past the covered bridges, the Vauban dam, the “Neustadt” (imperial district) and the European parliamentary site.

On my final day in Strasbourg, I traipse from one market to another. They are sandwiched close to each other in Petite France so it is easy to visit them all. My favorite is the Market of the Magi where I purchase hand-carved Nativity figurines to add to my collection at home.

As night descends, the Grand Christmas tree is illuminated in Place de Kleber. This has been a tradition since 1605 when the trade guilds were responsible for putting up fir trees decorated with ornaments during the holy Advent season. Nowadays, a giant fir tree is hand-selected from the Bois-de-Champ region of the Vosges mountains. Its size can climb to over 100 feet tall. At the foot of the tree, visitors leave gifts for the needy, thus the market’s name (Village of Sharing).

My final day is spent touring the Musee Alsacien to learn how 19th century town folk lived in Strasbourg. Located on Quai Saint-Nicolas, it seems a fitting last stop for my Christmas expedition. The museum was formed in 1907 but the structure dates back to the 17th century. The curators linked multiple old houses together via staircases and wooden passageways. With over 1,000 objects on display, I learn about earthenware, religious items, toys, costumes and furnishings from the 18th and 19th centuries. 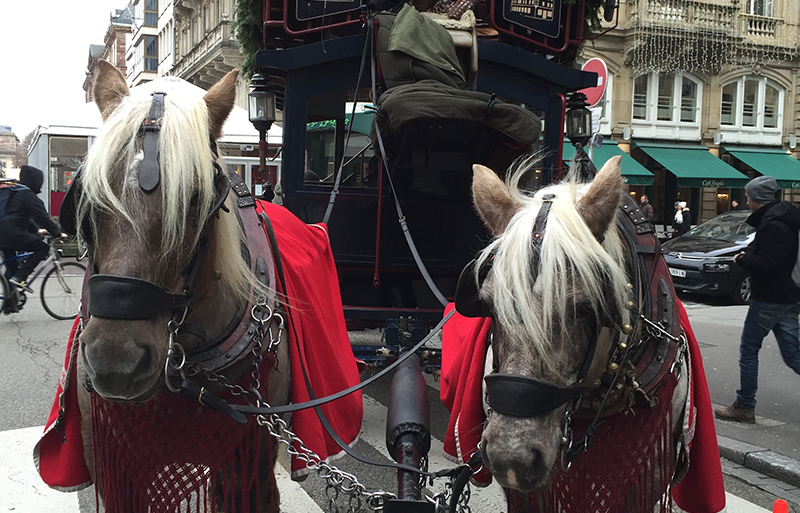 My final evening is spent at the centuries-old, half-timbered residence of Maison de Tanneurs where I indulge in a heaping platter of sausages piled high on a bed of sauerkraut. With a mug of Alsatian beer in my hand, I toast Strasbourg and its enchanting Christkindelsmärik. 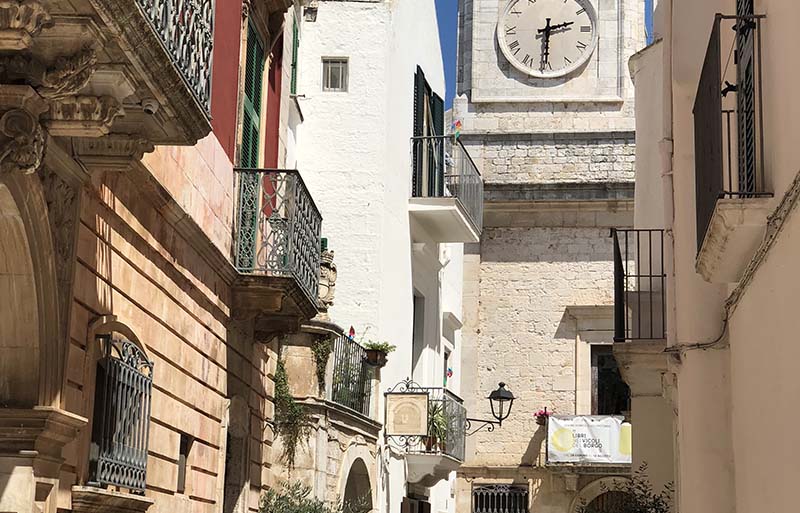 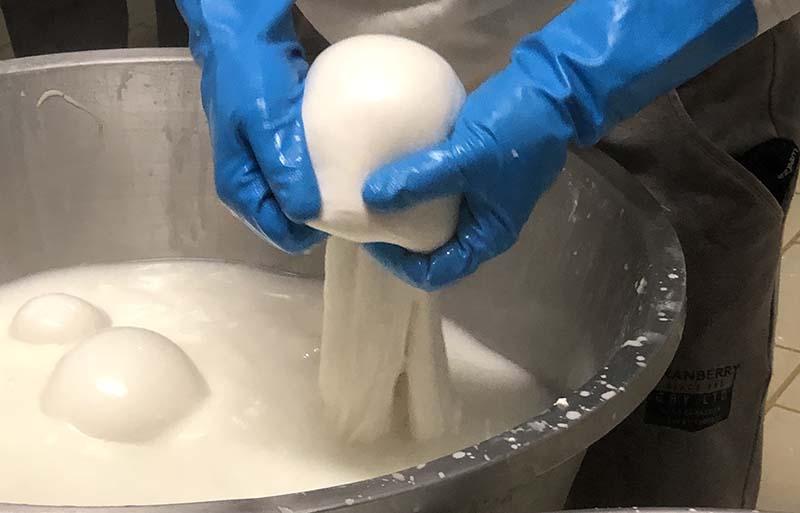 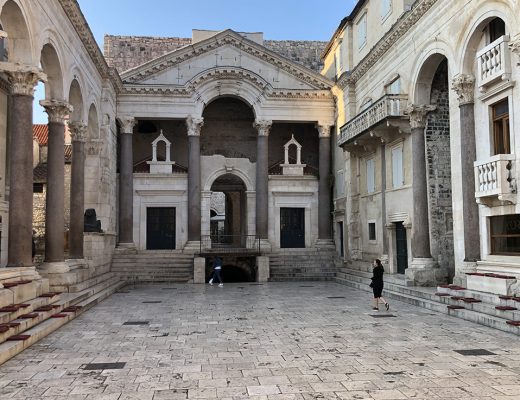