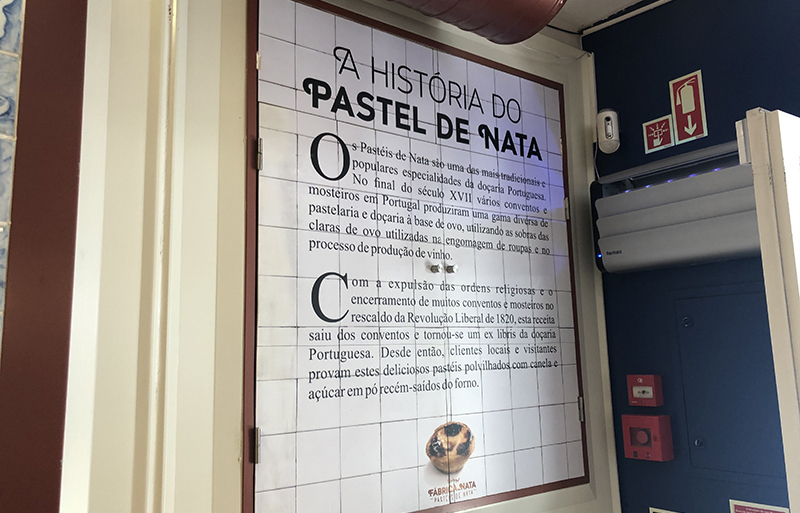 The secret to a perfect visit to Lisbon comes down to one thing—Pastel de Nata (Lisboa’s egg custard tart).
Now you will see them sold at Lisbon’s airport snack bars, but resist. Your mission is to check into your hotel or AirBnb in Lisbon, then google Fabrica da Nata. It is located at Praça dos Restauradores, nº 62-68. With your Google Map directions ready, head out the door.

Your first surprise will be to find out that you are not as in shape as you believed due to all those Pilates Reformer classes. There are HILLS in Lisbon (seven hills, in fact). But no matter. You need to burn calories and walk 15,000 steps before you indulge. Because believe me, you will not stop at one tart after you taste the first creamy bite.

Pastel de Nata translated means pastry of cream. A more accurate description does not exist. The essence of this tart is its eggy custard, dusted with sugar, that emerges from a hot oven with a blistering slightly burnt surface.

The cafe is located in Baixa Pombalina in the heart of Lisbon’s historic district. This busy pedestrian street is lined with shops and restaurants. It is also the perfect place to watch the Portuguese promenade with their dogs. I am delighted to see one such dog dressed up like a princess who is seated in her stroller while her owner sells items to tourists.

There is a big window at the cafe where I watch the staff mold the dough, mix the custard in a huge copper bowl and pour the mixture into the metal mini-tart pans.

The waft of cinnamon-laced custard drifts through the door. It will always be the scent of Lisbon in my memories. I just need to close my eyes and breathe in deeply to smell it. I am transported to Portugal. I think part of my love affair with this simple custard tart is linked to its history.

The cream custard tarts (Pastéis de Nata) are one of the most popular specialties of Portuguese pastry. Next to the end of the 17th century, several convents and monasteries of the seventeenth century in Portugal produced a diverse range of pastries and desserts egg-based, by using the remains of egg whites used in washing clothes and wine production process.

With the expulsion of the religious orders and the closing of many convents and monasteries in the aftermath of the Liberal Revolution of 1820, this recipe came out of convents and became an ex libris of the Portuguese pastry. (Fabrica da Nata)

I stand for several minutes watching the talented chefs adroitly mold the yellow-tinged dough to the metal tins. They are very deep in order to allow maximum custard. They rest on a large (and quite deep) baking sheets, five tins across. The tarts will be baked at the highest heat (500 degrees F).

The counter is quite busy as locals and tourists line up to buy the egg tart (which is a bargain at 1 euro). A DEGUSTAÇÃO costs 2.5 euros. It features one Pastel de Nata + Vinho do Porto. Typical beverages include espresso, cafe latte or Port. It is not unusual to see someone buying a “take home” box of six tarts (CAIXA DE PASTÉIS DE NATA) which emerges hot and toasty from the oven.

I climb the stairs to the second floor which resembles a Parisian salon. There are glittering chandeliers hanging from the ceiling. A blue velvet bench seat runs along the far wall. Individual small cafe tables with two chairs sit side by side. A round communal midnight blue banquet table allows a group to gather. There are glass balcony doors that reveal the bustle of the street below.

This would be a place to linger with a newspaper and an espresso on a weekend morning. This elegant room is also decorated with an oversized blue and white mural mural of historic Lisbon. Like Funchal, it appears that I will get to admire paintings which capture city life. I am particularly enamored with the framed black and white photographs of yesteryear Lisbon.

Naturally it is impossible to eat just one Pastel de Nata. I try to linger over the second tart knowing it will be my last until I return to Lisbon at some unknown future date.

I fly home vowing to learn how to bake this Portuguese pastry. I discover on Eater a recipe for baking the Pastel de Nata. It is excerpted from Lisbon: Recipes from the Heart of Portugal written by Rebecca Seal. It is ridiculously hard. I will substitute puff pastry for the homemade dough.

The secret is to get a crust that is flaky and slightly chewy. According to the recipe, it will take about 20 minutes to slow cook the custard on the stove. It can curdle if the temperature gets to high so you need a candy thermometer. The ingredients are listed below. I will post a photo on a future blog if I am successful. Cozimento Felix! (Happy Baking!) 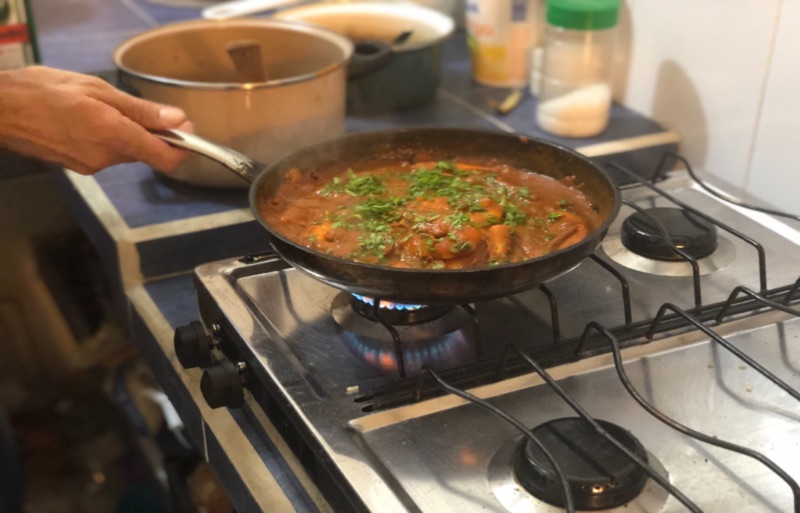