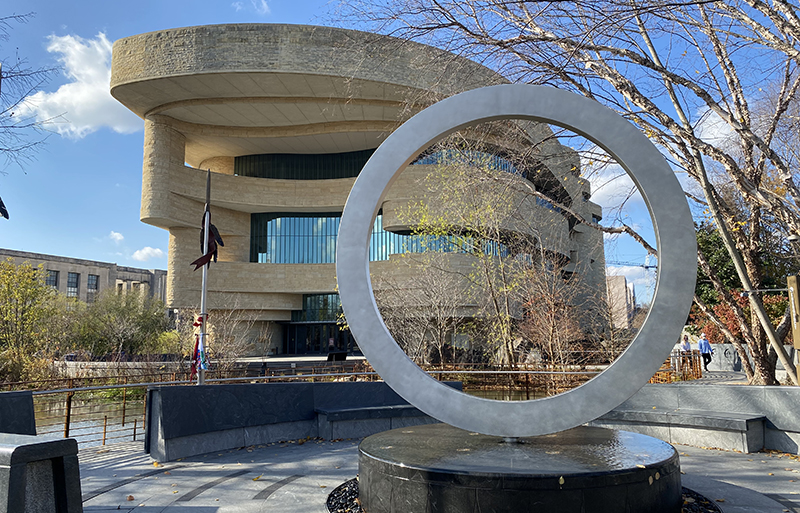 Located on the National Mall in Washington D.C., the Native American Veterans Memorial (NAVM) is a spiritual haven. It honors the service of American Indians, Alaska Natives, and native Hawaiians. However, it is also an artistic statement. 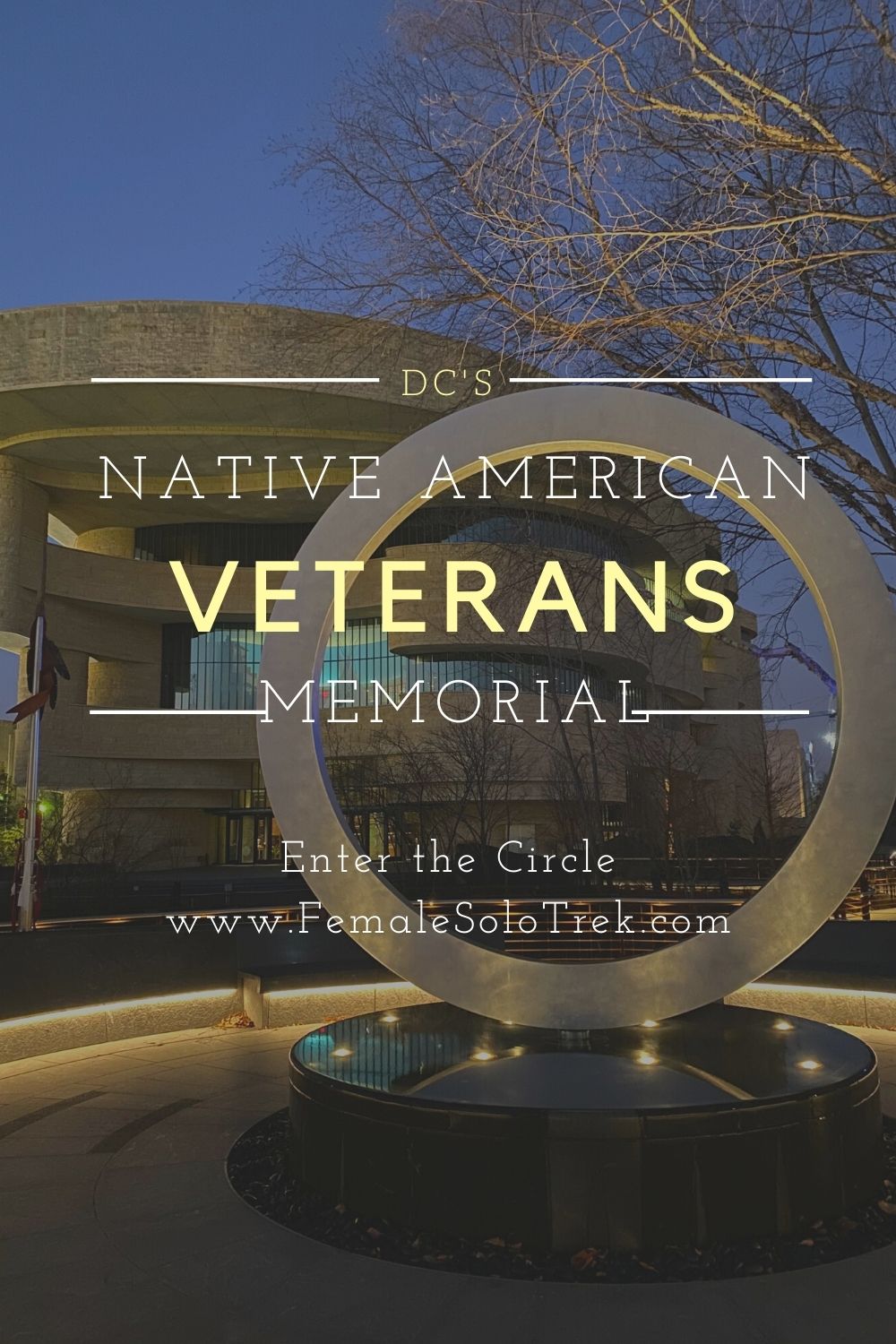 For example, nature embraces this memorial. Nestled in a wooded enclave on the National Museum of the American Indian (NMAI) site, the monument pulls me toward this sacred circle. I hear the mournful cry of the bird to draw near. The wind blows leaves across the concrete pavement of the veterans memorial museum site. 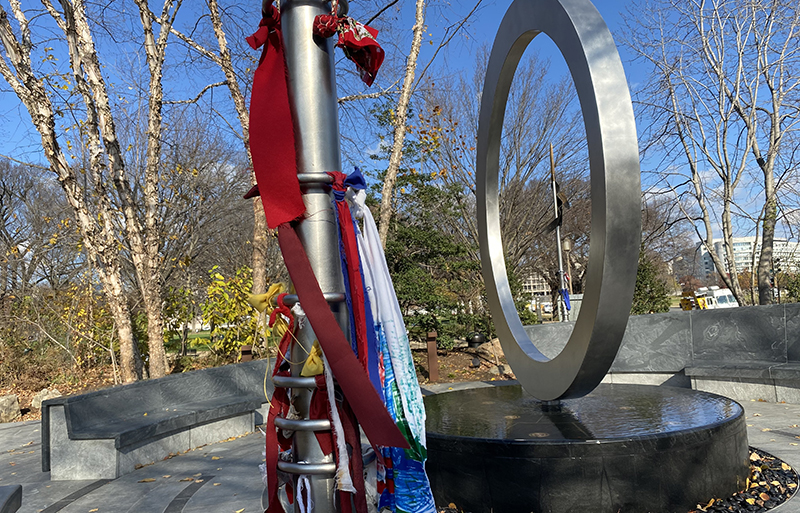 From my first visit, I find solace in visiting the memorial. The memorial sits on a man-made physical island. A high stainless-steel circle balances on an intricately carved stone drum.

In my eyes, NAVM is an outdoor cathedral. Like a roof, the turquoise blue sky stretches above. The low-slung carved stone drum is the altar, and the large stainless-steel circle sits atop it. To me, the latter is a portal.

But this memorial is not a single sensory (visual). I use all my senses—just as in church where we smell the incense, hear the choir, touch the hymnal and look through stain glass windows. My soul can soar here, like the eagle.

For example, Jo Harjo, the 23rd Poet Laureate of the United States and member of the Muscogee (Creek) Nation, knows the ways of the eagle. She captures this sensation in her vivid imagery of the eagle circling the blue sky with sacred wings:

“We see you, see ourselves and know
That we must take the utmost care
And kindness in all things.” (Eagle Poem)

Harjo believes humans’ need for poetry is essential to their existence: “We go to poetry to find a road to understanding, and not just any road–it must be compelling, and take us somewhere we’ve never been before.” 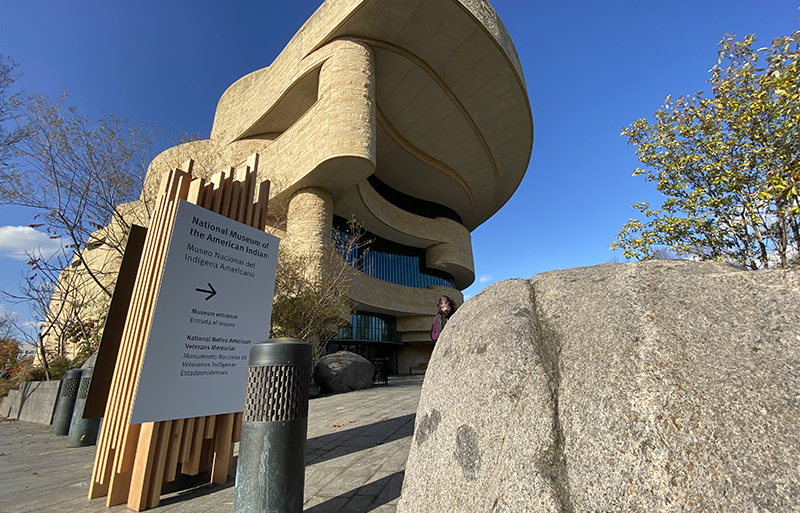 At the NAVM, we travel a twisting path as a nation to understand and honor the “exceptional sacrifice” of Native Americans who served as veterans. And most people don’t know that American Indians, Native Hawaiian, and Alaska Native veterans served at a higher participation rate.

This veterans memorial museum site opens a “door of self-affirmation” for Native Americans. If the outside world makes you feel invisible, then you need to hold up a mirror to help them see your culture, your way of life. 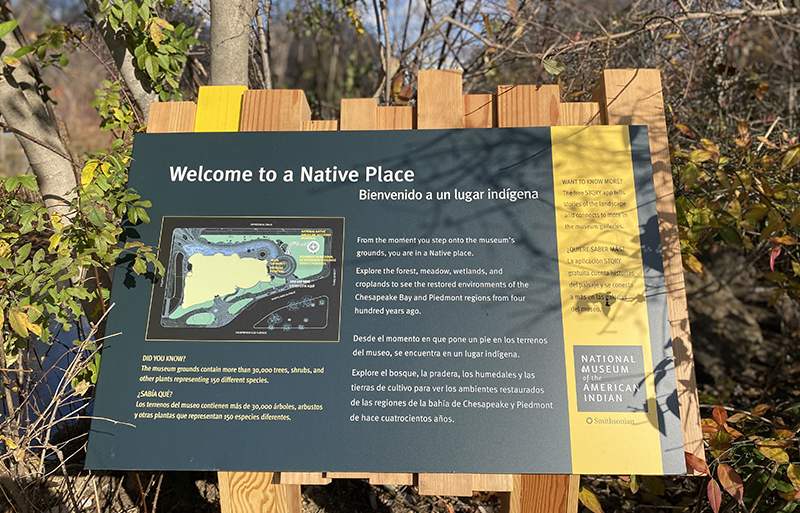 My journey begins as I pass the sign on the Independence Road side of the building. It declares this Smithsonian campus as a Native Place. The sign reminds visitors that “from the moment you step onto the grounds, you are in a Native place. Explore the forest, meadows, wetlands, and croplands to see the restored environments of the Chesapeake Bay and Piedmont regions from four hundred years ago. 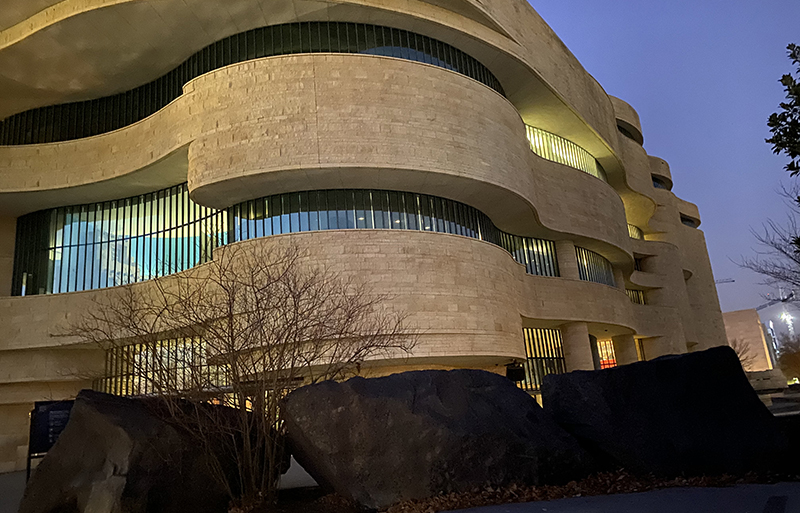 Huge boulders gather in a semi-circle, like elders watching over their tribe. The NMAI also resembles a rugged rock formation in its curvilinear structure. (The museum opened in 2005.)

“Native people believe that the earth remembers the experiences of past generations. The National Museum of the American Indian recognizes the importance of indigenous peoples’ connection to the land; the grounds surrounding the building are considered an extension of the building and a vital part of the museum as a whole . . . Four hundred years ago, the Chesapeake Bay region abounded in forests, wetlands, meadows, and Algonquian peoples’ croplands. The NMAI restores these environments and is home to more than 27,000 trees, shrubs, and herbaceous plants representing 145 species.”-National Museum of the American Indian

I follow the “Path of Life” which leads me through the museum’s gardens. Ahead lies a bridge that I must cross to reach Pratt’s Warrior’s Circle of Honor design. 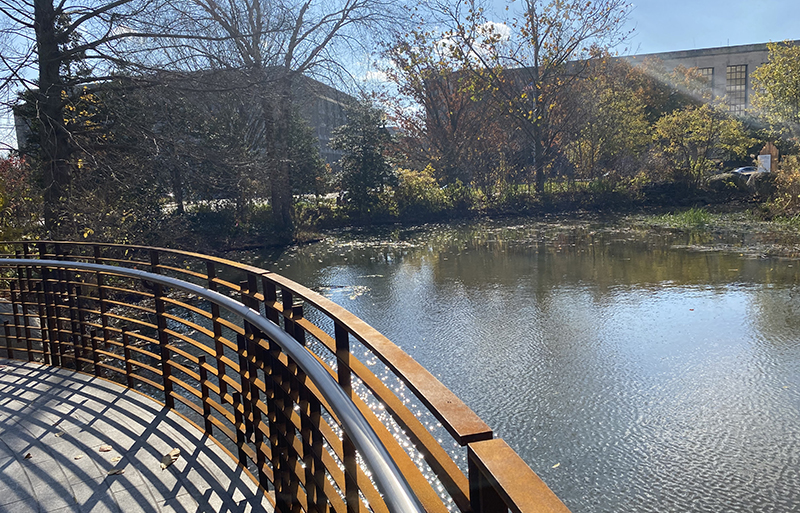 The landscaping creates a private room without walls. The lake looms large. Groves of trees encircle the perimeter and block out the street traffic.

Ahead lies the entrance to the veterans memorial museum site. I must cross a bridge to reach the circle of understanding.

On the left rounded wall of the bridge, I pass five seals representing the military—U.S. Army, Marines, Navy, Air Force, and Coast Guard. The bridge curves, just as life leads us in a non-linear path.

I turn with surprise as the circular site fills with the chanting of 13 Native American veteran songs (Ojibwe, Menominee, Blackfeet, Ho-Chunk, Kiowa, and Lakota Nations). It awakens my expectation that I have entered a place of wonder.

Approaching the memorial at the far end, I witness the steel circle. For Native Americans, it is the symbol of equality. All are equal. A circle also signifies family ties, closeness, and protection.

Four disconnected and separate benches surround the circle. They can be pews to gather together or meditate alone. The water flows from the drum. For ceremonies, participants can light small fires.

I find myself staring at the spears which rise from the drum. Bright color cloth, known as prayer ties, bind around the lances. These, too, are sacred emblems and should not be touched. Veterans, family members, and tribal leaders can tie fabric for prayers and healing. 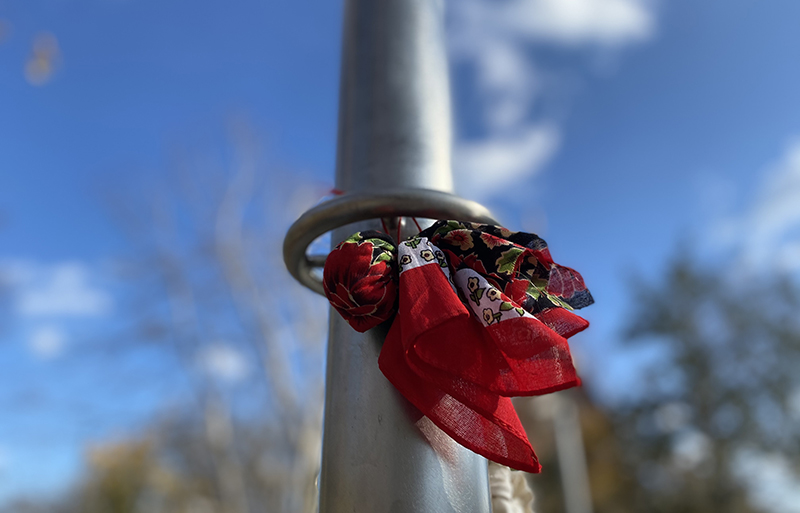 I feel as bound to this place as the knot that secures the prayer ties. I can’t see or hear all the ancestors who came before me, but I feel their presence in this sacred circle. As Harjo says in her poem, we must open our whole self to the sky, to the earth and to the moon when we pray:

“ . . . To one whole voice that is you.
And know there is more
That you can’t see, can’t hear;
Can’t know except in moments
Steadily growing, and in languages
That aren’t always sound but other
Circles of motion.”—Jo Harjo

Architect Harvey Pratt designed a memorial that celebrates the spirit and sacrifice of the Native American veterans. Pratt is a member of the Arapaho and Cheyenne Tribes of Oklahoma, Marine Veteran, and forensic scientist. But more importantly, he is a spiritual man who is attuned to his universe.

After the Smithsonian hosted an international design competition, the NAVM steering committee chose Pratt’s design in 2017.

Most importantly, the memorial must be welcoming. Visitors enter a circle of understanding while celebrating what is emblematic of the Native American spirit.

“The design incorporates symbols and elements common to many native traditions: fire, water, wind, drums, the cardinal points, and the circle shape. The memorial creates an interactive yet intimate space for gathering, remembrance, reflection, and healing.”—Harvey Pratt

Truly, Pratt knows the gifts of the earth; he was named the Red Earth 2005 Honored One. “The Red Earth Honored One is an annual award presented to a visual artist whose support of Native art has been substantial throughout his/her life and whose continuing involvement, activity and participation in their art form embodies the collective wisdom of their cultural experience,” according to the Red Earth website.

Pratt speaks through his art. A self-taught artist, he creates art through oil, acrylic, watercolor, metal, clay, and wood.

Frequently I find myself returning to this oasis within a noisy city. I love to take solo walks in the city. Two days ago, I chose to visit the veterans memorial museum site at daybreak. 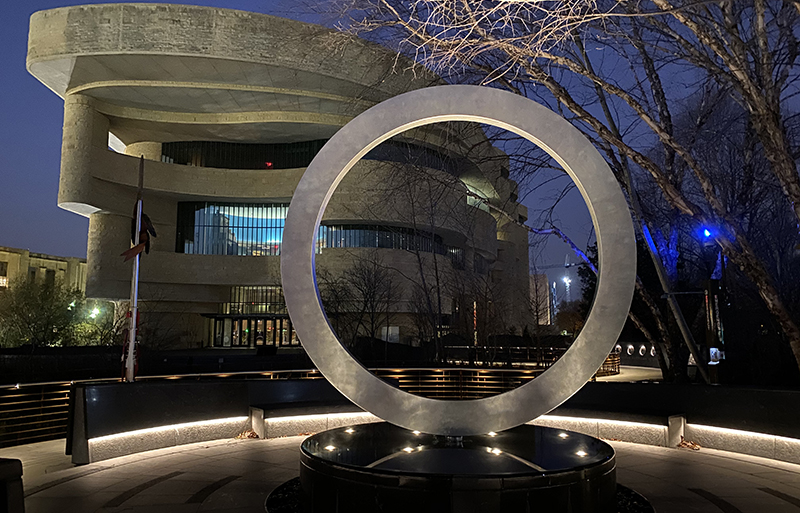 The moon hung low in the black sky above me. It mirrors in the stainless circle. No music played. I heard only the lone thrill of a bird which chose to stay behind in the city during winter.

The winter wind (on a 32-degree bitter cold morning) pushed me across the bridge. 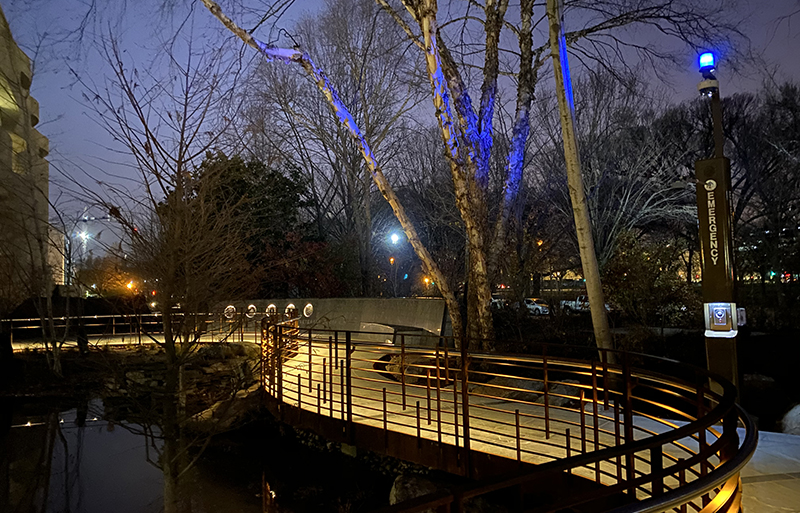 Then I stayed until the sun rose. And I watched the colors of the prayer cloths—pale blue, rose pink and lavender purple—stretch across the sky.

“We are truly blessed because we
Were born, and die soon within a
True circle of motion,
Like eagle rounding out the morning
Inside us.
We pray that it will be done
In beauty.
In beauty.”—Jo Harjo 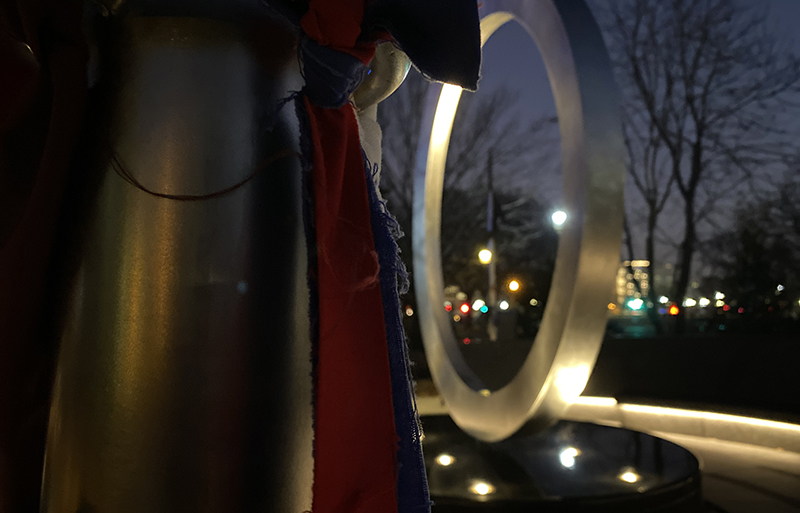 Dedication Address: You can listen to the virtual dedication of the NAVM on Veterans Day 2020. “We invite you to participate in this historic moment—for our country, for veterans, and for the Native American communities whose loyalty and passion have helped make America what it is today.”—Kevin Gover (Pawnee), Director, National Museum of the American Indian 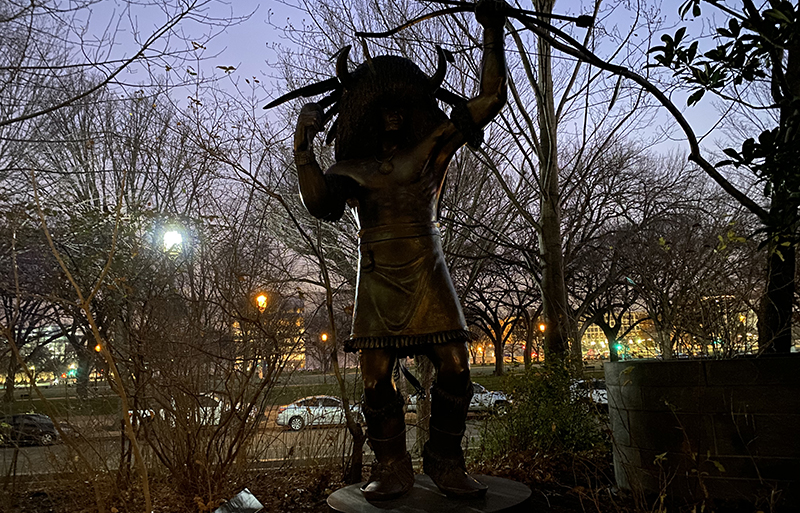 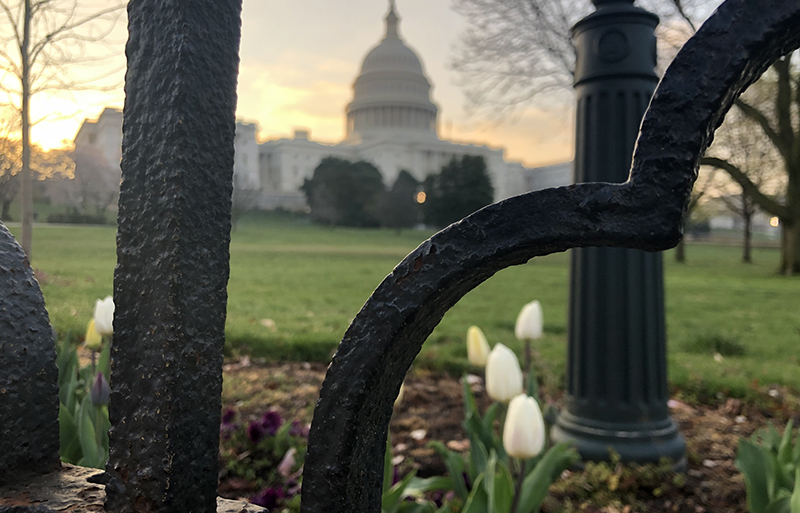 The Virtues of Solo Walks