Be An Explorer In DC Neighborbood Georgetown 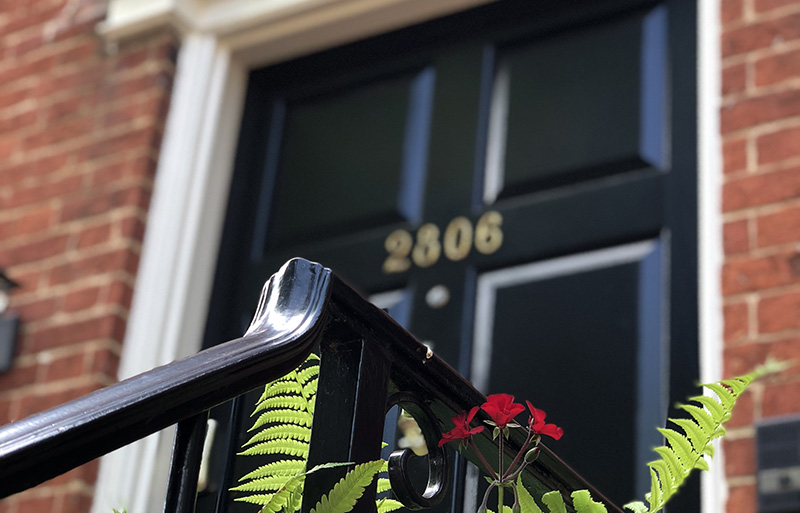 The slogan for DC neighborhood Georgetown is “A Story in Every Brick.” You better believe it! It is not certain who was “George” in George Town. Naturally it is presumed to be George Washington but Georgetown’s founding preceded George’s nomination as our first U.S. president. It could have been named for King George or the two men named George who sold land. (George Beall and George Gordon owned the 60-acre tract.) Georgetown actually preceded the creation of the nation’s capital as it was formally established in 1751 when the Maryland Assembly authorized a town on the Potomac River. This convoluted tale perfectly describes the 268-year history of this town perched on the Potomac that presidents, poets and muckracking journalists* have called it home.

Georgetown is a bee hive of streets running parallel to M Street and crisscrossing Wisconsin Avenue; multi-storied rowhouses dressed in pink, yellow, blue and green doors, with Disneyesque landings festooned with flowering pots. But this is no made-for-TV stage front. Georgetown architecture dates back to the 16th century. A particular thrill is to stumble on a “half” street. Slum housing that was condemned in 1935 as a result of the Alley Clearing Act have been redeveloped with bakeries, shops and bars. There is even a cat cafe in Georgetown (although it is currently closed due to the pandemic.) Georgetown is defined by its cross formation—Wisconsin Avenue crosses M Street, which are the two primary arteries which flow through the cobblestone city. It is also the noose that hangs many drivers who get caught in the infernal traffic jams that bedevil the city (especially during weekends).

Wisconsin Avenue dumps into the Potomac River via the K Street overpass. This gritty underarm area used to be the home of parking lots until the waterfront was redeveloped with high-end restaurants and shops known as Washington Harbour. It is located between 30th and 31st Street off K Street. Now it is a favorite place to eat dinner, enjoy a cocktail or even skate in the winter. Year-round, strolling along the waterfront boardwalk is a favorite pursuit in the DC neighborhood Georgetown. You can see the spires of Georgetown University in the distance. Across the Potomac River sits the Kennedy Center, Watergate and Key Bridge.

But my favorite pursuit is to book brunch at Fiola Mare. Sipping a glass of prosecco and eating bucatini carbonara (featuring pancetta, pecorino, parmigiano bonati with a sunny side-up farm egg) is the perfect start to your weekend in Georgetown. Be sure to end your meal with a bombolino (which is a ricotta donut, with apple cider and caramel budino, fior di latte froth and hibiscus sugar).

But you don’t have to spend a lot of money to enjoy Georgetown’s waterfront. Early morning brings out the joggers enroute to Rock Creek Park by way of Georgetown and the Key Bridge. You can picnic for free on the ample parklands that overlook Arlington and the Kennedy Center. My favorite “secret side of DC” is to show visitors to the Labyrinth on the water’s edge. It begs you to spend time in quiet contemplation.

During Christmas, Georgetown GLOW turns on the lights . . . literally . . . in Washington, D.C.’s “original neighborhood.” In 2020, the outdoor art installation was cancelled due to the pandemic. Instead the city scheduled a new “Season of Lights” in spring and summer 2021.

Spring GLOW ran from Friday, April 9 through Sunday, June 27. The five commissioned artworks are viewable by day, but brighter at night. Mask will be required. Each artwork allows social distancing. Plus Spring GLOW programming included in-person and virtual options, including artist talks and walking tours.

Also the historic C&O Canal and its towpath run through the city, parallel to its waterfront. The first mile starts in Georgetown; it ends 184.5 miles later in Cumberland, Maryland.

From sunrise to sunset, runners and bikers enjoy this urban oasis. “Non-athletic” folks can enjoy a picnic or people-watching.

“Along the C&O Canal’s side streets, including Grace Street and Thomas Jefferson, you’ll find some of the best bakeries, coffee and tacos in town, as well as recreational opportunities, architectural gems, and remnants of the neighborhood’s industrial history.”

I recently learned that I am a “Gongoozler,” which is a person who enjoys watching the activity on canals. Judging by the folks I saw leaning against the bridge rails to take photos of the C&O Revitalization Project, I am not alone in my love of all things canal!

Georgetown’s most famous son in the 20th century was President John F. Kennedy. In fact, JFK met his future wife, Jacqueline (Jackie) Bouvier in Georgetown. JFK lived in Georgetown with his sister Eunice from 1949 to 1951.

Jack and Jackie lived at 3307 N Street NW from 1957-1961 until they moved to the White House. It is on the other side of the Wisconsin Avenue boundary. The architecture is Federal style. JFK Jr was born here. The Kennedys sold the house after he became president. (Check out www.georgetowndc.com/self-guided-kennedy-walking-tour/ for the 10 different Georgetown residences where the Kennedy family lived between 1949 and 1964.)

Local’s Tip: Hidden away in an alley near the Waterfront is a mural of JFK. It memorializes Kennedy’s 1963 speech in Berlin when he stated unequivocally: “All free men, wherever they may live, are citizens of Berlin and, therefore, as a free man, I take pride in the words‚ Ich bin ein Berliner!”

Revolutionary landscape architect (Andrew Jackson Downing) was also smitten by its DC neighborhood Georgetown’s charms. Downing designed the Robert Dodge Mansion in Georgetown, which still survives 200+ years later. It is a prime example of Downing’s Italian Victorian style. He was a progenitor of the style. The architect designed the Italianate home at 1527 30th St NW. He died tragically in a boat accident in his 30s.

He had a huge influence over Frederick Law Olmsted, who designed America’s iconic Central Park. On the memorial urn statue dedicated to Downing at his home in Newburgh, New York are inscribed his lofty vision for America: “Plant spacious parks in your cities, and loose their gates as wide as the morning, to the whole people.”

On a less grand scale but certainly no less exciting for chefs who honor the Queen of French Cuisine is the home of Julia Child. The dilapidated yellow house located on Olive Street has been renovated.

Julia called it her “little jewel.”

Julia and Paul Child bought their home in Georgetown in 1948 when they moved back to the states.

One of the best ways to see Georgetown is by foot. I advocate wandering up and down the numbered streets without any plan. Stop to ponder whatever attracts your eye—a fire station medallion, a bright blue door, an aged church, a cat staring out a window. You will meet a lot of dogs out for a stroll. All the Georgetown homes are eye-opening. Many century-old homes illustrate the federal-style architecture prominent in the early 1800s (think stretcher panels with alternating brick patterns).

An excellent specimen is the Dumbarton House. The Federal-style house is located in Georgetown and was completed around 1800. The first owner was Joseph Nourse. It is now a museum that displays decorative arts and furnishings. The grounds include the East Park and the Herb Gardens.

Another excellent example of Georgian/Federal style architecture is Tudor House, which was the home of Martha Custis (Martha Washington’s granddaughter). It is considered the second-best depository with 15,000 objects of the George and Martha Washington period. The architect was William Thornton who also designed St John’s Church (which is the oldest church in Georgetown).

Tudor Place remains one of America’s last intact urban estates from the Federal period. The gardens include forget-me-nots and Florentine tulips. There are grape varieties climbing the North Garden Arbor. Located at 1644 31st Street, NW, the 5-acre property takes up one city block. Tudor Place passed through four generations (over a period of 178 years). It became a museum in the 1980s.

When I wander in the DC neighborhood Georgetown, I like to look at the historical artifacts of a bygone age. For instance, most of Georgetown’s 1800s houses were outfitted with fire company medallions. A resident contracted with a private brigade to protect their home against fires. Telegraph wires would inform the fire company. The easement medallions showed their residences were “protected.”

There were competing private fire companies. According to the DC Historic Sites, the Vigilant Firehouse (located 30 feet north of the C&O Canal) was a private volunteer fire brigade formed in 1817. You can still see these iron plaques displayed on Georgetown homes. It is a fun game to hunt examples during an afternoon walk.

Another historical curiosity is the “police box” that you see on Georgetown streets. These boxes allowed the policemen to contact the central office while patrolling a neighborhood. They would stop at the box on their rounds. Some had rings. If they picked someone up, they could handcuff the criminal and call for a pickup. Today the police boxes are often lavishly painted or decorated. You can find them throughout Washington, DC.

As the houses move up (and away) from M Street, they get bigger. As a tobacco city, Georgetown was a center of commerce. As pocketbooks grew, so did the size of homes. The wealthy merchants built prestigious home in a section of Georgetown called the Heights.

While DC neighborhood Georgetown is the home of the well-heeled, it has also attracted the quirky. No tour is complete without visiting The Church of Two Worlds.

“In the heart of D.C’s tony Georgetown, a church that communes with the dead.” (Washington Post Magazine)

The building was purchased for $43,000 in 1960 from a Presbyterian Church. It is a spiritualist Church. The members believe they can communicate with the dead. They believe the dead grow in intelligence. Now I wonder if the church could contact all the dead “Georges” who made this port so famous and find out who the blasted town is named after.

* Fun fact: Drew Pearson, the muckraking journalist who penned the “Washington Merry-Go-Round” column, lived in Georgetown. He had 60 million readers. Reportedly, Pearson got in a fistfight with Joe McCarthy which had to be broken up by Richard Nixon (who was then a congressman). 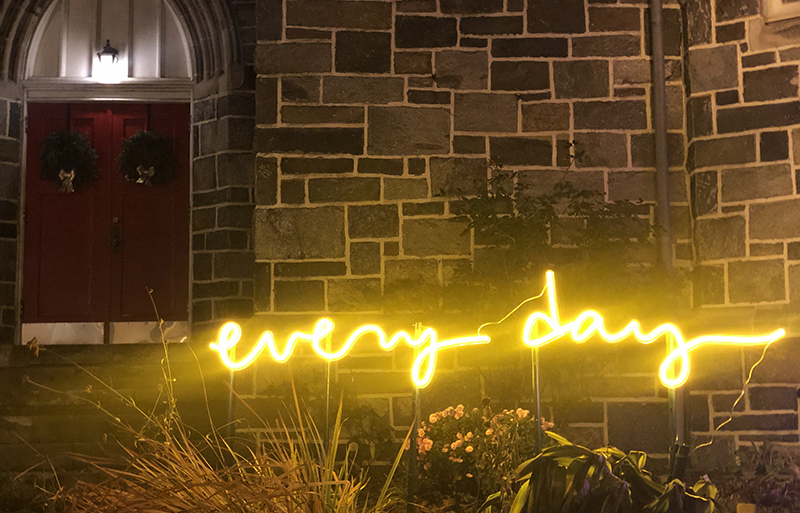 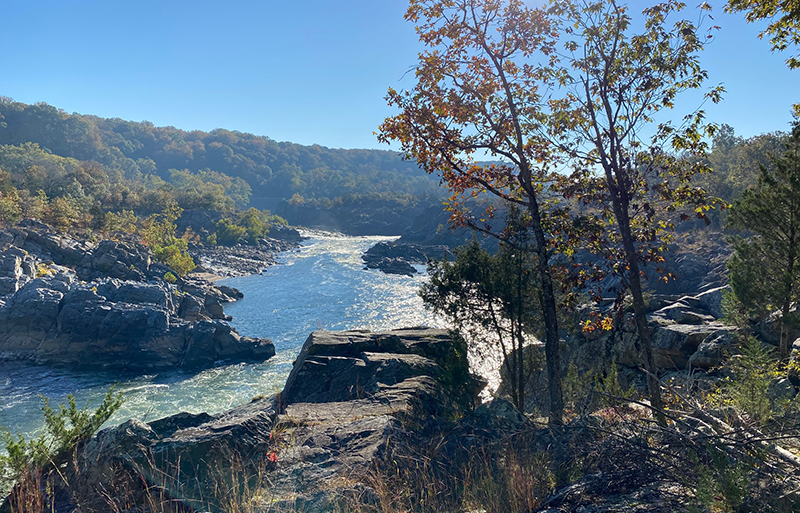 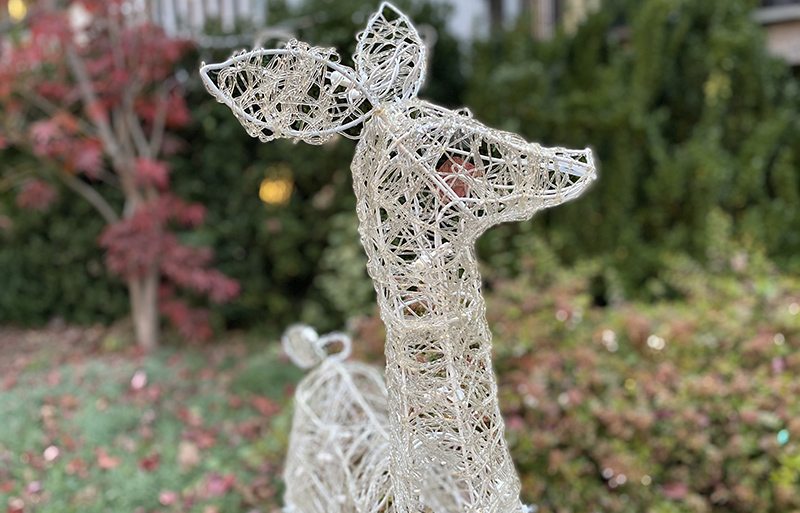