Puppy Trek at the National Arboretum 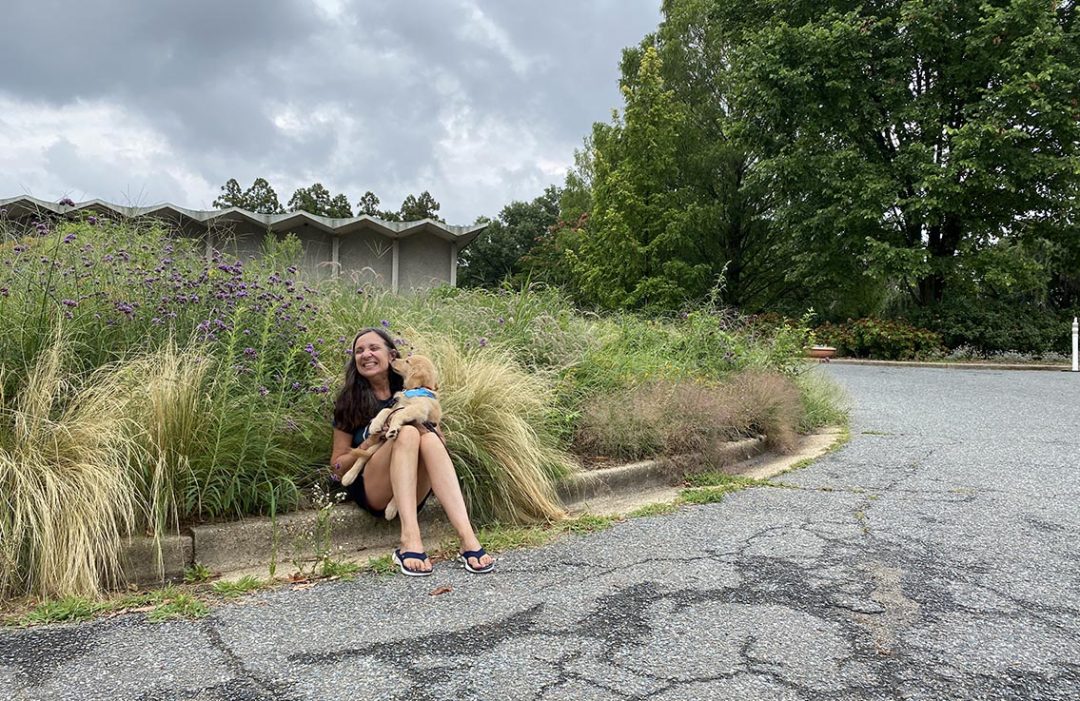 Take a puppy trek at the National Arboretum in Washington D.C. on the weekend—or enjoy a day off from work during the week—if you really love your canine.

This is Dog World USA—sticks, mulch, pebbles, bushes, plants, and flowers abound—to be closely sniffed and observed. In August, my 12-week-old puppy Parker spent his Sunday morning at the Arboretum.

I wanted to find a place where my puppy could attempt a tiny hike—running up hills, climbing over the occasional log, and walking for over an hour. I am a big believer in the advantages of forest bathing. But this foray into the azalea groves and deep forest through a puppy trek at the National Arboretum was action-packed. Whenever Parker would stop to sniff and explore, I would let my mind go idle and just concentrate on the rustle of the leaves and the heady scent of woodland perfume.

Seeing nature through the eyes of your canine is extraordinary. Watch your pup’s head jerk skyward as he sees a bird alight from a tree. Notice his hard concentration staring at a mound of ants built on a gravel path. Laugh as your puppy dances to keep up with a leaf blowing across his path. Play fetch (and some more fetch) with a long stick discovered under a tree. Munch on mulch (then be forced to spit it out by your “hooman.”) Sail away to dog bliss.

“The journey of life is sweeter when traveled with a dog.”

Pursuing a puppy trek at the National Arboretum is not for the lazy especially if your idea of a perfect Sunday is brunch at an outdoor cafe. Prepare to walk at least two miles at the Arboretum. You’ll also be carrying your puppy at least one-third of this distance when he gets tired, bored, or cranky. ALSO pack lots of poop bags because there are no convenient “Fido stations” for cleanup.

Parker and I started our puppy trek at the National Arboretum promptly at 9:15 am at the parking lot outside the Visitor (Administration) Center. Plan to arrive early in the morning to get a parking place close-in. (Otherwise, you’ll be forced to park at the overflow parking lot near the New York Avenue entrance.) The Arboretum is very popular especially with families because the kids can run around for hours in the fresh air.

Although the Visitor Center is currently closed due to COVID, there are wonderful plants and flowers to view. Parker was fascinated by the aquatic plants floating in the pool. (I kept a tight grip on his leash so he wouldn’t dive into the water.)

Grab a pamphlet at an outdoor stand to use as your map of discovery. Be careful not to let your puppy try to pull the brochure out of your hand and stuff it in his mouth. (I learned this lesson the hard way.)

I allowed Parker to decide where we would tour initially at the Arboretum. He immediately led us to tall weeds, then a pile of mulch chips, followed by an outdoor lavatory (grass). He stopped at every bench just in case we needed a little rest.

Finally, I guided us back around the circle entrance so we could start on the path toward the Azaleas Collection. There is eye candy for both humans and canines. Year-round, you should see something in bloom.

Since this is an article focused on a dog fun activity, I needed Parker to sniff out the best places to see. My puppy’s motto? “Keep on retrievin’ fren.” A puppy trek at the National Arboretum offers wide sidewalks and long paths. And there are plenty of open areas for your dog to take his hooman (human) on a romp in the grass. There are 9.5 miles of winding roadways at the Arboretum.

In fact, Parker and I happily watched a dog and his hooman playing fetch with a ball. The dog was off his leash. Suddenly we heard someone blowing his horn. The man below didn’t seem to notice. We looked up to see an employee with the Arboretum in his truck. He blew his horn several times in warning. “All dogs must be on a leash at all times,” he said sternly to me. Got the message sir!

Our first destination was the overlook. I wanted to take a photo of Parker with the National Capitol Columns in the distance. I knew from past experience that this is a long trek across the meadow to reach the columns. Since I didn’t want to wear out my puppy, we just looked from afar.

But if you have not ever visited the Arboretum, this is the #1 thing to visit. Why did the columns of the Capitol end up here? The story is fantastical.

“One of Washington’s most notable and unusual landmarks is the National Capitol Columns.”

Now these Corinthian columns sit on a natural knoll in the Ellipse Meadow. To me, they are our version of a national antiquity—like the 5,000-year-old tombs in Egypt—but much newer since as a nation the U.S. is only 245 years old.

Originally, these sandstone columns were sited in 1828 at the East Portico of the U.S. Capitol building. They traveled from Virginia by barge from a quarry near Aquia Creek. But the columns were not sized correctly to fit the iron dome that was completed in 1864. So these august columns needed to find a new home in the 20th century.

Fast forward to the 1980s when Arboretum benefactress Ethel Garrett decided to find a permanent home for them. Landscape designer Russell Page selected the east side of the Ellipse Meadow as their final resting place.

“. . . the grandeur of the columns would be in scale with the more than 20 acres of open meadow.”

You should expect big crowds milling around the National Capitol Column during peak hours of attendance.

The #2 place to visit during our puppy trek at the National Arboretum is the Azaleas Collection. It is a long walk for Parker from the parking lot. If I had done my homework, I would have discovered a small parking area near the dirt path entrance. Next visit Parker. I promise! Thanks Fren (doggo spelling).

Picture a dirt pathway lined by giant azaleas and rhododendron bushes. Walk past a Monet canvas of red, pink, salmon, lavender, and white puff flowers. Under your feet lie a carpet of silky petals which floated in the breeze before their descent. The air is perfumed by the rich moldy dirt. It may be the most glorious place to experience spring in Washington DC after the cherry blossoms at the Tidal Basin. The earliest peak azaleas bloom date reported in the last decade was April 15; the latest was May 4. Take a virtual walk during peak blossom.

But it is August, not April. So Parker sniffs the leaves of these flowering bushes while I remember their spring blooms. Parker races along with the network of rustic woodland trails that follow the contours of Mount Hamilton. I partially jog behind to keep up with the pull of his leash. Our zig-zag path allows Parker to smell the azaleas at close range.

Unfortunately, we discovered our route was prematurely cut off due to maintenance. Although Parker slipped around a “Do Not Enter” sign, we soon discovered that we had to turn back. But you can follow the trail to the top of Mount Hamilton. It is one of the highest points in the District of Columbia. At the elevation of 240 feet above sea level, the hiker will be treated to a view of the Capitol framed by trees.”

Parker and I stop frequently to read the signs that explain the history of the Arboretum’s azaleas collection. The Glenn Dale Hillside is located on the south slopes of Mount Hamilton. These modern-day hybrid azaleas sprang from the breeding work of former Arboretum Director Benjamin Y. Morrison.

The Frederic P. Lee Garden spreads along the northeast slopes of Mount Hamilton. It is located north of the Morrison Garden. This garden was dedicated in 1971. The late-blooming azaleas appear in May and often last to early June. The Arboretum planted the Satsuki cultivars around a small pond.

My puppy made it very clear to me that his favorite part of visiting the Arboretum was the benches. Conveniently located near sidewalks as well as along the woodland paths, they provided a place to contemplate nature—or in the case of my puppy—to rest four furry paws.

In fact, after our exhausting puppy trek through the Azaleas Collection, Parker desperately needed a rest. I carried him off the gravel path and down the road. Up ahead we saw a bench. Energized, he wiggled out of my arms. He jogged fast to reach it. Jumping up, he barked in satisfaction as he lay down.

Then Parker stretched out. His body was arranged in a sploot.

“Being this cute must be so freaking ruff.”

My legs pushed up against his soft caramel-colored fur. I gazed at the National Capitol Columns. He took a well-deserved snooze. Good puppy! On our next visit, Parker and I will tour a different section of the Arboretum.

Here are other major sections to visit at the National Arboretum:

Each year, thousands of children experience hands-on gardening and nutrition activities at the garden through family events and field trips

You can download a PDF of the Arboretum if you want to print out and bring on your visit.

According to the website, “the grounds of the U.S. National Arboretum are open from 8 a.m. to 5 p.m. every day of the year except for Christmas Day. The National Bonsai & Penjing Museum is open from 10 a.m. to 4 p.m. daily. Admission to the grounds and museum is free and no tickets are needed.”

Where do you travel with your doggo? Does he like forest bathing? What are the best toys to bring on a nature excursion. Comments welcome! 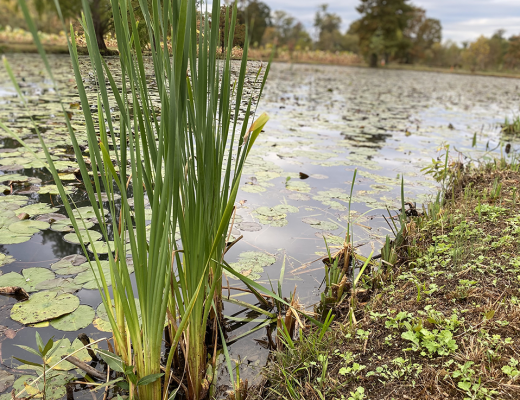 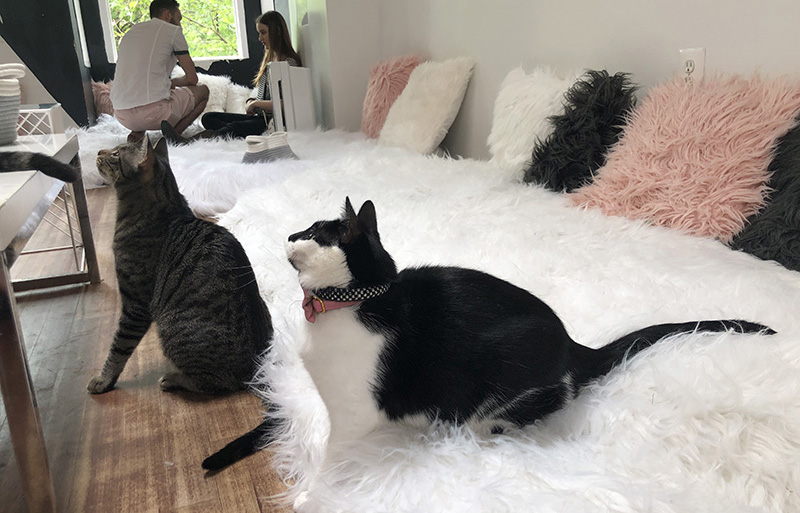